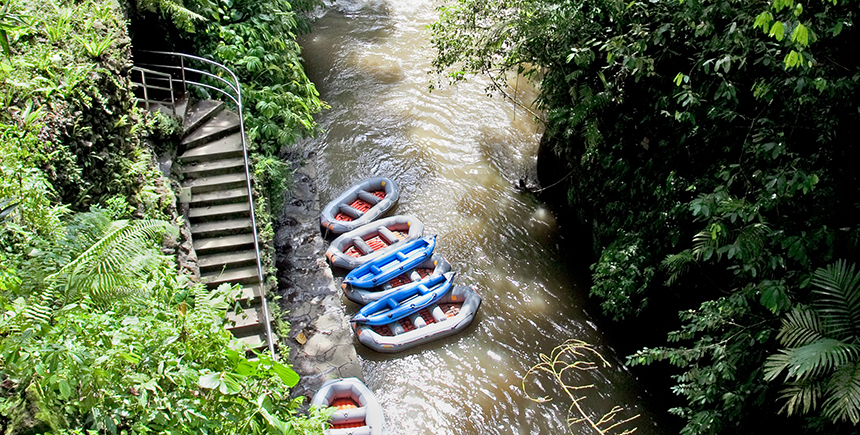 Just after midnight on New Year’s Day, a one-eyed sheik gazed at me through his good eyeball and told me I was very beautiful. And though the encounter lasted all of two minutes, it is (thus far) the most unusual start to any of my New Years. I’ve also decided to see it as the most auspicious. How could it not be? I was in Bali, Indonesia. The fabled island that is often portrayed in books, magazines and movies as a magical place where travelers transform, face down their fears and quite possibly even themselves — all amid stunning ocean vistas, lush natural vegetation and some of the most jaw-droppingly beautiful tropical resorts on Earth.

I’d arrived in Bali with three other female friends, and together we formed a rather skittish crew. Forgoing the coastal hubs on the fringes of the Indian Ocean, we headed straight inland towards the town of Ubud — home of rolling hills, rice paddies, traditional crafts, Balinese dance and a pretty swinging New Age scene. Our driver, who was extremely warm and welcoming, introduced himself as Wayan, which, as he explained, means “first-born” in Balinese. Ubud, we later found, is filled with Wayans, Mades (second-born), Nyomans (third) and Ketuts (fourth).

Suggestions that Ubud had become a bastion of kaftan-wearing single women who were all out to write a novel and snag a Javier Bardem were rife at that time. And although there was some truth to this, my friends and I felt no shame in wanting to fully embrace our transformative Bali experience — Hollywood leading man or not. It would be unfortunate to let a cliché get in the way of a real experience, and we were determined to soak up what we could in the island’s spiritual heart.

In Ubud we discovered classes that taught everything from yoga to flower-arranging. Two of my friends signed up for a slew of yoga sessions, another friend opted to take a course in raw food preparation, and I took a class in silver crafting, allowing myself to revisit the more hands-on, creative side that I rarely allowed myself to indulge. Our mornings were spent sunning by our resort’s pool, but in the afternoons I would leave my group and wander off, exploring Ubud’s winding streets, chatting up shopkeepers and haggling for the best deals on ceramic teapots and the aforementioned kaftans.

Feeling primed to face up to all kinds of challenges — an especially productive week of baby-stepping out of your normal routine can have that effect — I signed up for a river-rafting ride, momentarily overlooking the tiny detail that is my biggest fear in life: drowning. After our inflatable raft swooshed its way along the coursing river and crashed against the white-water torrents of the rocky rapids, we floated down calm, pristine waters that reflected a cool glow upon our skin. Then, out of nowhere, our boatman deftly hoisted me into the air and tossed me out of our raft — even as I yelled to kingdom come that I didn’t know how to swim.

“You have a life vest!” he yelled back, laughing. I struggled, flailing in the river, but eventually my life jacket righted me as I spat out river water.

Ordinarily, I would have screamed and panicked until someone came to my rescue. But then, ordinarily, I would not even have signed up for this little adventure in the first place. But somehow I managed to calm down, and then turned so that I was lying on my back.

I looked up, and found myself awed by the lush green trees that formed a canopy overhead. I could see the golden sunlight and glorious blue sky peeking through the leaves. And it was then that I truly felt the life-giving energy of Bali, with its pure waters holding me up as I drifted forward — at peace in the sacred hands of the gods, and ready for the next challenge.

Also read: 5 days in Bali: What to see and do

This article originally appeared in the October 2016 issue of Smile magazine.

This hotel in Cebu, owned by an Italian, is proudly Filipino