In one of the Philippines’ last wild frontiers, a dedicated team embarks on regular missions to protect Tubbataha’s most vulnerable marine species

Written and Photographed by Tommy Schultz 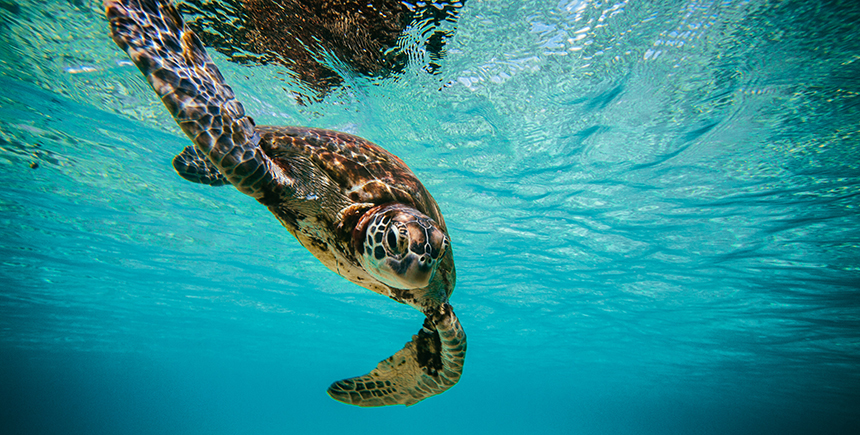 Green sea turtles are listed as an endangered species, and their numbers in Tubbataha are dwindling 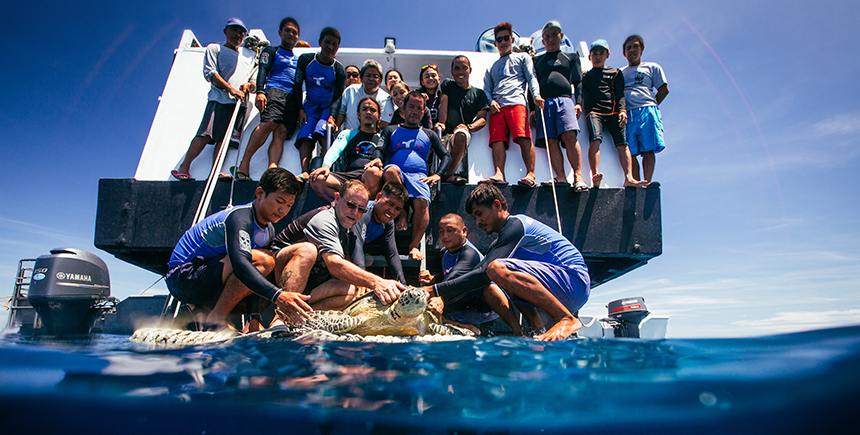 Releasing a tagged turtle back into the sea 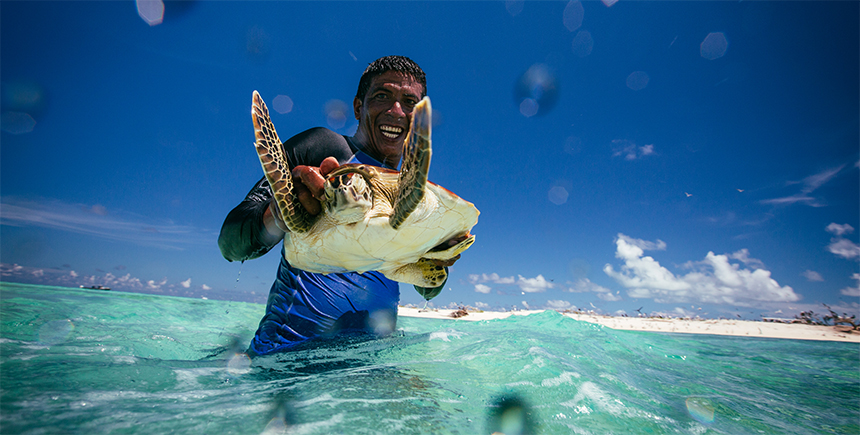 Green sea turtles can weigh up to 100kg 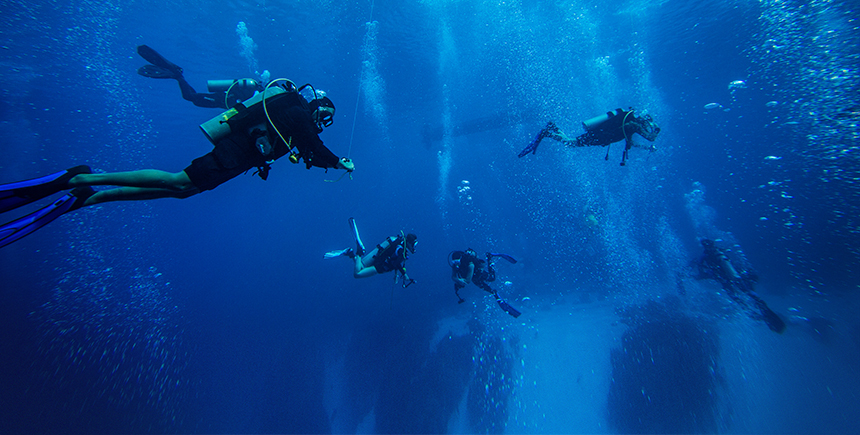 The waters of Tubbataha are protected under Philippine law 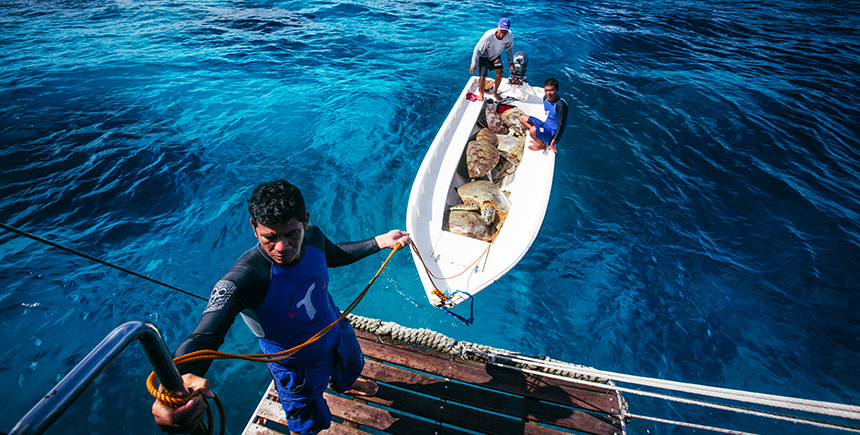 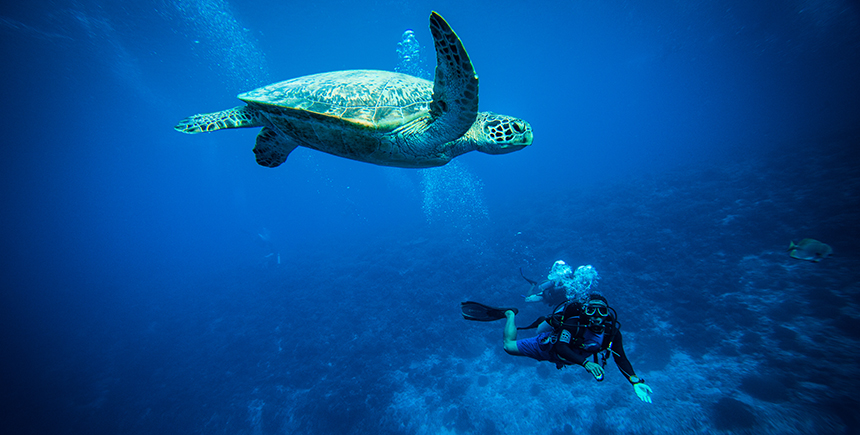 Dr. Nick fits a turtle with a tracker that transmits location data to a satellite 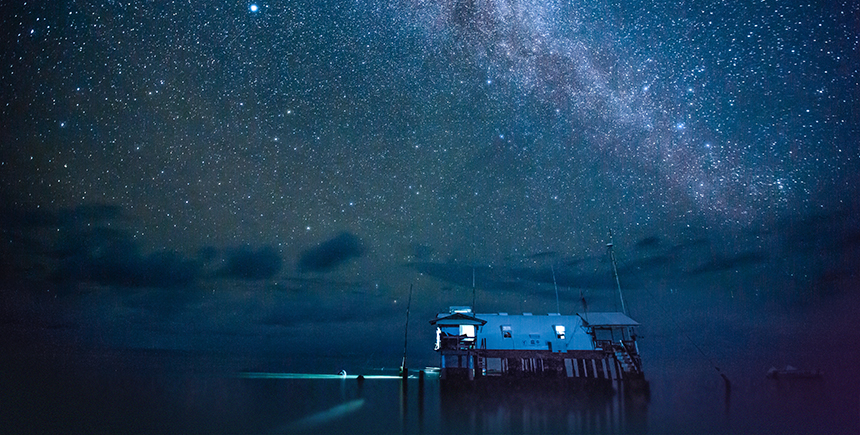 3.40am, the Milky Way over Tubbataha

Angelique Songco feels a special affinity for Tubbataha. Her husband, Norman, first sailed to this spot in 1978. That was not even 40 years ago, but the story of that fateful trip already has the feel of a primordial tale, passed down from a time when these remote, sapphire-coloured waters teemed with life that was almost untouched by human interference.

Norman had been tipped off by a fisherman from Quito, a village in Palawan, about this site, which was 10 hours by pump boat from Puerto Princesa — the nearest landmass. The cost of the fuel required for the trip amounts to several thousand dollars in today’s money, and Norman’s expedition party of divers and spearfishermen had pooled their money to buy the fuel. Their expectations were modest — they all brought their spear guns along, hoping to catch enough fish to offset the cost of the trip. “They lost every single one of those spears,” Angelique remembers. “Some were bent at a 90-degree angle because the fish were so big.”

From that original fraternity of hardcore divers, word of Tubbataha spread among the world’s diving elite. In 1988, this 97,000ha swathe of the Sulu Sea was established as the Philippines’ first National Marine Park by then-president Corazon Aquino. By 1992, it had become a UNESCO World Heritage Site. Today, it is known as one of the most legendary dive destinations on the planet.

Angelique herself first visited Tubbataha in 1982. “We went during the summer, in April or May because the seas are too rough during the rest of the year,” she recalls. The trip marked the beginning of her decades-long love affair with these waters. In 2001, she became the manager of the Tubbataha Management Office (TMO), which executes the policies of the Tubbataha Management Board, a multi-sectoral body comprised of government and non-government agencies that oversees the protection of these waters. As a long-serving defender of Tubbataha’s marine life, she’s now known affectionately as Mama Ranger.

Tubbataha still teems with life — about 600 species of fish live in this Coral Triangle, including tuna, trevally, jacks, rainbow runners, huge groupers and rare species like Napoleon wrasse and bumphead parrotfish. There are also 360 species of coral, 11 species of sharks, 13 species of dolphins and whales, and over a hundred species of birds. But with increased awareness of Tubbataha’s breathtaking biodiversity, and as coastal areas within easy reach of nearby cities became more and more depleted, poachers and other illegal fishermen have begun to venture into these protected waters, intent on raiding its treasure trove of marine life.

Tubbataha’s green sea turtle population is a case in point. They still nest in the area, but over the years, relentless poaching has resulted in a diminished population. My Tubbataha tale begins with these turtles. Mama Ranger herself had invited me to join a team of park rangers, marine biologists, and volunteers on their June expedition trip, and I jumped at the chance, flippers on.

That’s how I found myself aboard the M/Y Navorca research vessel. While the fancy live-aboard dive boats may offer more amenities, the Navorca has its own charms. There is a sunny galley area for the crew to hang out in, rows of comfortable bunks and a buzz of camaraderie that comes from a shared belief in a common purpose. During this week onboard the Navorca, the specific mission is to tag Tubbataha’s green sea turtles, which have become increasingly hard to find and are only partly understood.

The expedition team has dubbed this mission the turtle rodeo. I grew up in rural Virginia, where the rodeo is Christmas. My memories of it involve galloping broncos, bucking steers, and the near-constant possibility of permanent injury. I thought I knew what to expect, but in this aquatic version of the old Western sport, the spurs and steers are replaced with expert boat maneuvering, bare hands, and green sea turtles that weigh up to 100kg.

The turtle rodeo begins with one of Tubbataha’s sharp-eyed park rangers scanning the shallow sandbar flats of the Bird Islet for the shadow of a cruising sea turtle. The boat driver coordinates with the ranger via a series of rapid-fire hand signals and shouts. As the boat approaches, the turtles are invariably spooked and flee for the safety of deep water. Propelled by their powerful flippers, they look like underwater birds in flight.

We’re already traveling over 20-30km per hour, and as the boat draws within striking distance, the ranger catapults himself from the prow of the speeding boat, diving towards the sea floor to grab hold of the turtle and bring it to the surface. As you can imagine, the turtles have other plans. They forcibly slap the water (and the rangers) with their powerful and surprisingly sharp front flippers. After just an hour, everyone’s hands are bleeding with multiple cuts and abrasions.

Once captured, the turtles are handed over to the waiting team of marine biologists, who measure their dimensions, identify their gender, and fit each one with a tiny metal tag bearing a tracking number. The turtles are then released back into the water through the rear deck.

Marine biologist Nicolas Pilcher heads the science team. Originally from the United Kingdom and currently based in Kota Kinabalu, Dr. Nick, as everyone calls him, is a passionate sea turtle conservationist with a kind of enchanting professorial demeanor (at least until he cues up an endearingly extensive playlist of American music on his iPhone). He’s been on several turtle-tagging trips in this region over the past few years. On this trip, he’s pleasantly surprised to find turtles with tags from previous expeditions, noting the changes in their size and location in a growing database of important sea turtle information.

By the week’s end, 200 sea turtles are tagged with traditional numbered metal tags. Two mature males weighing over 100kg are fitted with satellite trackers — these small transmission antennae, batteries and sensors are attached to their weather-beaten shell using marine grade epoxy. The satellite tags are designed to activate only when the turtles are raised completely out of the water, and once activated, they will enable marine scientists to gain incredible new insights about the nesting and migratory patterns of these two turtles for as long as the batteries last (which is usually about a year). “This may be the first time mature male sea turtles have been tagged by satellite,” says Dr. Nick, as he triple-checks that the tags are properly attached and functioning as they should.

We are not the only ones searching for sea turtles in Tubbataha. Before the first day of tagging is completed, we discover a medium-sized turtle with a crescent-shaped arc of teeth marks across its shell — the work of a tiger shark. This turtle has gashes on both flippers still tinged red with blood, but it has survived the attack.

Just as terrestrial wilderness areas like Yellowstone Park have predators like grizzly bears and wolves, the aquatic world of Tubbataha is prowled by sleek tiger sharks who occupy the apex of the food chain. The sea turtles are their natural prey. So the presence of these sharks is not cause for alarm (although the turtles will probably disagree). Rather, this is a sign of a healthy ecosystem, which is due in no small measure to the work of Angelique and the park rangers.

The team of marine park rangers who protect Tubbataha forms the last line of defense against the illegal fishing boats that come here from as far away as China. The rangers live in an 8m-high domed station that is the only inhabited structure for hundreds of miles, and which more resembles a futuristic space station than Palawan’s traditional nipa palm and bamboo huts. The walls are lined with wooden bunks where the rangers live for their entire eight-week rotation. A typical team consists of eight rangers, but during the high season from March to June, that number is increased to 11.

Before Navorca returns to Puerto Princesa, I decide to spend the last night of the expedition at this station with the rangers, so I can attempt to take photos of the night sky far removed from the lights of civilization. Using the astronomy app on my phone, I check to see what time the Milky Way will be perfectly positioned overhead — 3.40am. It’s going to be a real struggle getting up.

Before I’ve even dropped my camera bag on the spare bunk, Segundo Conales, one of the longest-serving rangers, asks me to join them for a snack of fish caught just hours ago from the surrounding reef. Only the rangers are allowed to fish here, to supplement their basic ration of rice.

The mood of the group is upbeat, a band of brothers. But their smiles belie the challenges they face during eight weeks of zero contact with their friends and family in the outside world. “The hardest part is being here in the off-season, when we are often stuck inside the station during the bad weather. What if you made a mistake in calculating how much coffee you need? You can’t get more,” says Angelique. “They are surrounded by water, but it’s not like they can take a bath whenever they want. We agreed to use only one gallon per day for bathing. Little things like this can become major challenges.”

But even with all the challenges facing the future of the park, she remains upbeat. “I think the ecological value of Tubbataha is actually more important than the aesthetic value. We know that it contributes to food security, it’s not just beautiful. We are believed to have more sharks per square kilometer than anywhere else on earth. Many other species use Tubbataha for raising their young, which grow up to live in other parts of the country.”

I think of the green sea turtles — threatened as a species, they now have a fighting chance of surviving, thanks to the help of the rangers and marine biologists. I’m grateful to have experienced one of the world’s last truly wild places, with the people who care the most about protecting it. Without their tireless efforts, the majesty of this underwater kingdom would have been lost long ago.

This hotel in Cebu, owned by an Italian, is proudly Filipino