We take a bite of Taiwan's smelly specialty...and find ourselves enjoying the experience

Written and Photographed by Dave Tacon 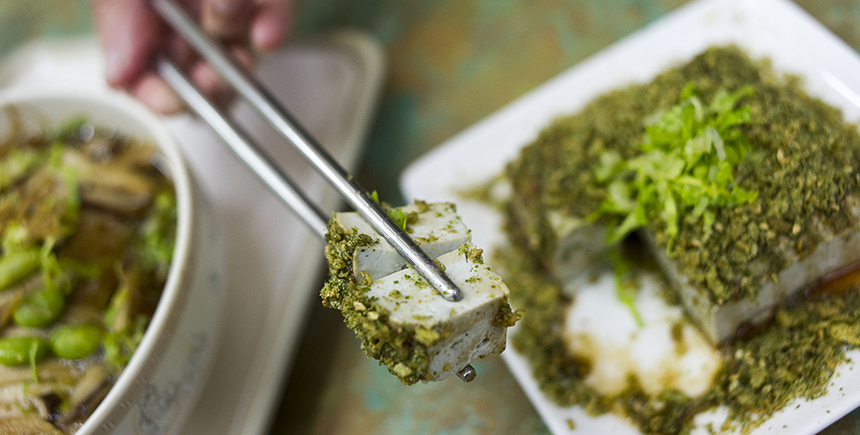 Sometimes touted as Chinese blue cheese, no other country has embraced stinky tofu, a pungent fermented bean curd, with the same passion as Taiwan. With the possible exception of the durian, it could be Asia’s most polarizing food. Its unforgettable door wafts from night markets and shopfronts, attracting long queues of hungry fans and repelling others. Only beef noodle soup, which has its own festival in Taipei, eclipses stinky tofu as Taiwan’s national dish. If Taipei ever decides to honor stinky tofu with its own festival, it may gain fame as the only food festival that can be smelled from the moon.

Although I make elaborate detours to avoid particularly smelly vendors, I steeled my nostrils to check out this idiosyncratic dish. A local Taipei foodie recommended Dai’s House of Stinky Tofu (145-1 Nanjing East Rd, Section 5; +886 2 2760 7652) as one of the city’s nest examples. Located in Nandang District within walking distance of Taipei 101, I know I have come to the right place as the distinctive smell, not unlike rotting garbage, greets me from across the road.

Inside, the restaurant’s 66-year-old owner Hui-Min explains that the secret of her famous stinky tofu is the brine used to ferment it. “The base brine is 16 years old. We keep adding water as it evaporates.” Hui-Min’s vegan recipe uses a combination of handpicked ingredients that includes Chinese spinach, bamboo shoots, winter melon, cinnamon and mustard leaves. “It’s good for people with digestive problems,” she says. “It has lots of good bacteria.”

Despite my trepidation, I find her stinky tofu an enjoyable snack. Dai’s House of Stinky Tofu’s liang ban chou tofu is a serving of cold cubes of stinky tofu topped with shredded lettuce and sprinkled dried seaweed, salt and pepper, sweet soy sauce and a touch of sesame oil.

While the tofu is a subtle but disconcerting shade of pale duck-egg green, it has a creamy texture like firm cottage cheese. The savory topping and the sweetness of the soy combine well with the slightly sour tofu. Eating it certainly helps one forget the smell, and at NT$35 (PHP51), it’s a bargain.

Over at the opposite table, a married couple and their 11-year-old daughter are having dinner. “We forced our daughter to come, she thinks it smells bad,” admits Alex Lee as he dunks some crunchy fried tofu into the soy and garlic dipping sauce. “But I would encourage any visitor to take a bite. It’s a unique local experience.”

This article originally appeared in the August 2015 issue of Smile magazine.