Because you’ll need the cash for other important stuff, too 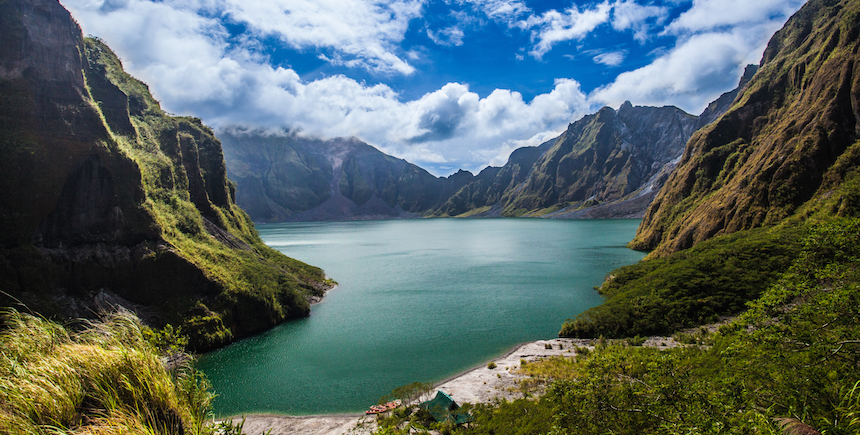 Whether you and your spouse-to-be are outdoorsy types, culture vultures, or city slickers, we’ve got some cheap and cheery recommendations for where to take priceless pics for posterity.

Love the great outdoors? You’ll want to do your pre-wedding shoot here. What makes this an amazing wedding shoot location is its not-so-distant geological history. Much of the stunning and dramatic landscape surrounding Mt. Pinatubo is a result of the stratovolcano’s cataclysmic eruption in 1991, which shot volcanic ash plumes 30km into the sky for 15 hours, caused a global decrease in temperature by 0.5 degrees Celsius, and led to the formation of Lake Pinatubo, the deepest lake in the country at 600m.

Bora Bora may be a favored destination with the jet-setting Hollywood crowd, but there are so many slices of paradise to be found right here in the Philippines. With crystal-clear waters and powder-soft beaches, Boracay is an obvious choice for loved up couples who want to take memorable pictures. To lessen the chances of getting photo-bombed by frolicking tourists, try to make it there during the low-season months of October and November. The sunsets are particularly beautiful during these months, and if you seek out less touristy beaches, you might just have these to yourselves.

Why travel to far-flung Athens when you can get the Midas touch right in South-East Asia? Home to a crumbling structure that resembles the iconic Acropolis of Athens in Greece, Fortune Island is still a relatively abandoned beach resort, which makes it all the more ideal for your pre-wedding shoot. If you love diving, consider an underwater shoot at the nearby shipwreck site where a Dutch warship sank in 1600.

If you’re hoping to replicate the crazy-bustling streets surrounding New York’s Times Square, just go to Singapore’s Orchard Road on a weekend and take a look around you. You’re going to need a highly skilled photographer with excellent crowd control know-how to capture beautiful shots, such as the one above.

El Nido has been widely featured in top 10 lists across international publications, and it’s easy to see why. A protected area, this province in Palawan boasts coral reefs, towering limestone cliffs, enchanting emerald lagoons, and 100 white-sand beaches. A fan of The Bourne film series? You’d be excited to learn that some of the scenes from Bourne Legacy, the series’ fourth installment, were filmed right here.

Love Bali’s Eat, Pray, Love vibes but not particularly fond of the overcrowded tourist spots, Seminyak and Kuta? Meet their hipster cousin, Canggu. Just 20 minutes north of Seminyak, Canggu has beautiful beaches and picturesque rice fields, plus a growing number of hip cafés that would create the perfect setting for a pre-wedding shoot with a cafe-hopping theme.

Yes, you can fulfil your dream of having your pre-wedding shoot in the City of Love without having to actually travel to Paris. The remnants of French colonialism in Hanoi are impossible to miss — from striking colonial architecture to a local cuisine that’s heavily influenced by the French, it’s little wonder Hanoi is touted as Paris of the East.

Also read: 10 of the most Instagrammable spots in Metro Manila