The best offbeat things to do in Phuket

Rain or shine, Phuket holds a host of weird and wonderful attractions far removed from the island's sleazy mass-tourism reputation 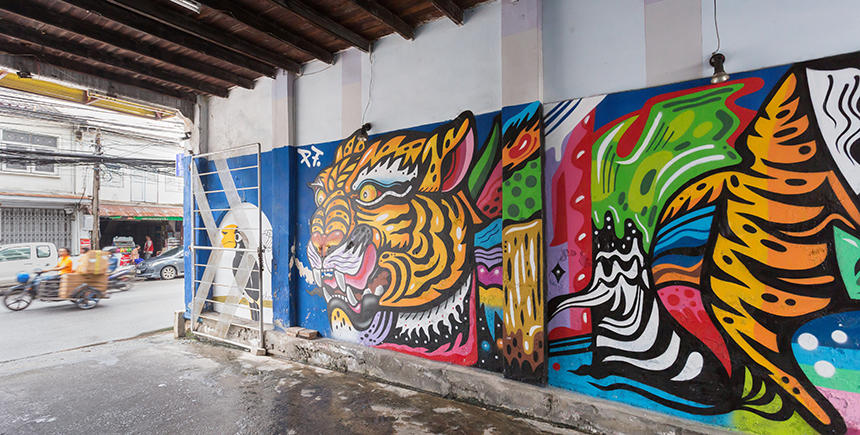 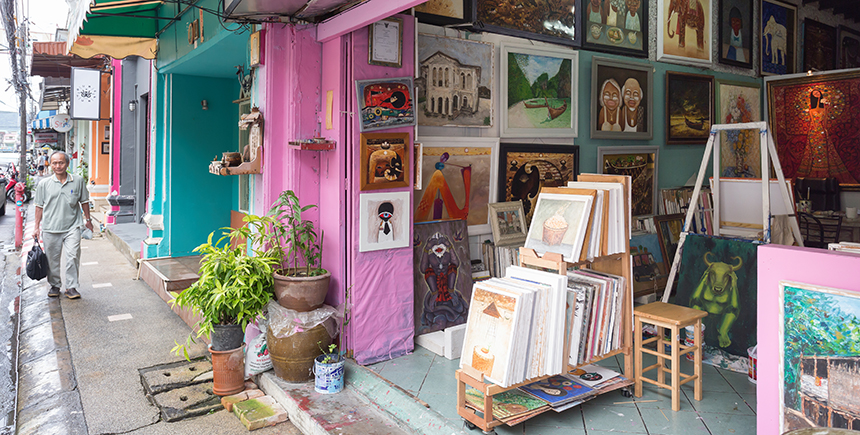 One of Phang Nga Rd's many art stores 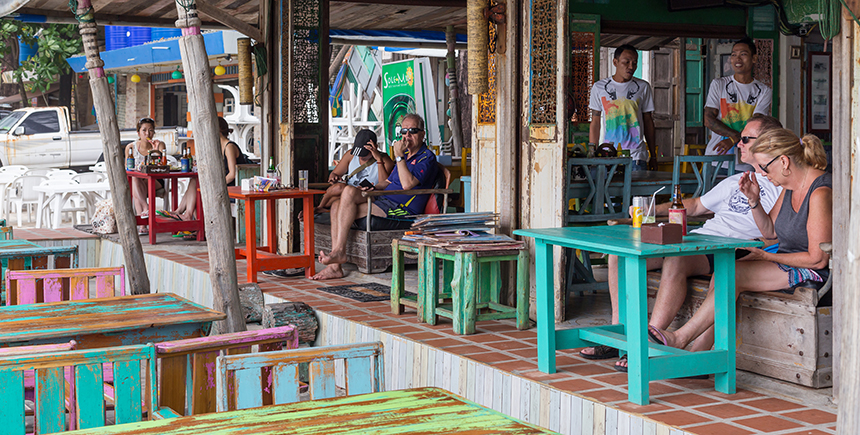 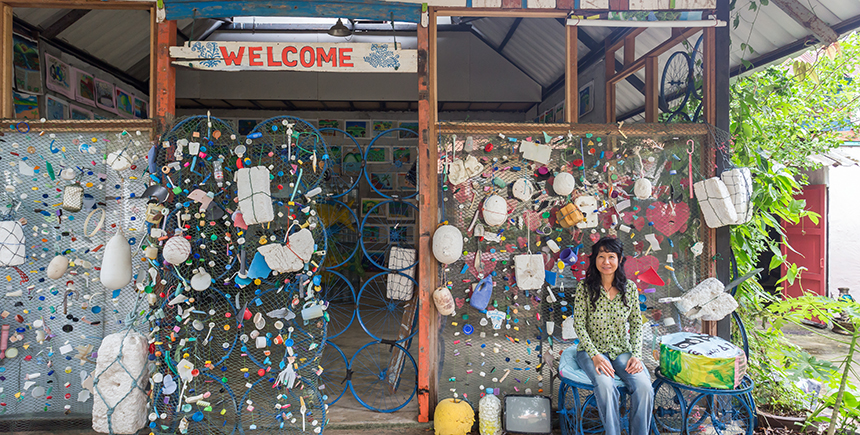 A gallery at Phuket Art Village 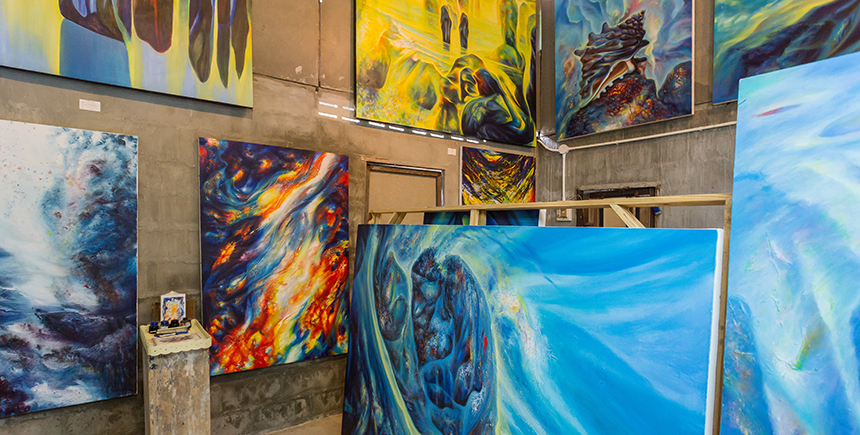 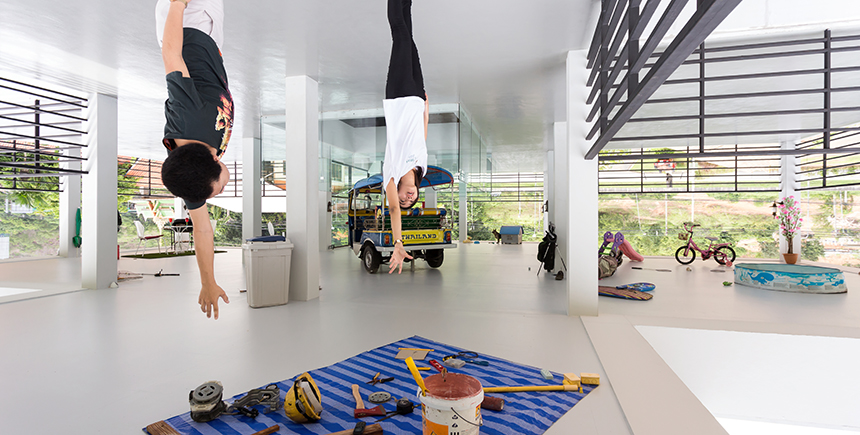 Hanging out at the Upside Down House

We all know Phuket — or at least, we think we do. For reasons good and not so good, this Thai island has lured so many tourists since the mid-’80s, its popularity barely dented even by 2004’s tsunami, that in the eyes of non-Thais it’s almost as famous as Bangkok. This year Phuket is predicted, rather incredibly, to be the sixth most popular destination in the entire region, ahead of Bali, Taipei and even Hong Kong, with nearly 10 million international overnight visitors.

Yet the vast majority visit with just four things on their mind — sun, sea, sand and that other “S”. Some get so overheated by the first and enamored of the last that they barely make it to the beach, let alone Phang Nga Bay’s stunning karst outcrops. Until recently, I was one of the legion who couldn’t name a district here aside from Patong or Phuket Town, after a 2006 trip marred by food poisoning meant missing out on the interior completely.

It’s a crying shame Thailand’s largest island continues to win plaudits only for its Andaman Sea shorelines, and notoriety for its nightlife (only this year, TripAdvisor voted Kata Noi the country’s top beach). For Phuket holds entire worlds within it that dazzle, fascinate and befuddle in equal measure, making it an alluring destination even — perhaps especially — in low-season days of higher rainfall, quieter bars and emptier hotels.

My plan was to uncover the lesser-explored, under-appreciated, vintage and downright obscure. So naturally I skirted the all-too-obvious (and ethically questionable) tiger and elephant reserves, tourist bait like Phuket FantaSea and Simon Cabaret, franchise museums like Trickeye and the gender-bending gaudiness at Bangla Road. Instead, I set out on a coastline-hugging odyssey from Patong, starting with lunch at Sole Mio (24 Loma Food Center, Patong Beach Rd; +66 85 619 6686), one of several vibrant spaces bearing the hallmarks of longtime resident, hotel designer and artist John Underwood.

Sandwiched between mango vendors, surfboard touts and forgettable beachside cafés, Sole Mio’s color-blocking design scheme stands out, its pastel-heavy aesthetic combined with an Earth-friendly ethos — think two-seaters made from recycled doors, bright ceiling fans, vivid fabrics, old tin roofing and an ancient piano. Like dining in an antiques store, this is an experience a world away from the modern, sophistication-free options cluttering the streets nearby.

The mid-afternoon lull is an ideal time to explore the “K” beaches along the western coast — Kamala, Kalim, Karon and Kata. It also offers a window for venturing inland to Kathu village, whose bucolic appearance has been upturned by Keemala (10/88 Moo 6, Nakasud Rd; keemala.com), an eight-month-old resort so extraordinary it can only be fully appreciated via a leisurely tour.

To say Keemala has been designed like a cross between the sets of Avatar and Star Wars gives some idea of its otherworldliness, but the treehouse villas and igloo-like guest pods around the resort’s sharp inclines have to be seen to be believed. The greatest rewards are saved for those who climb to its uppermost level, where a world-class bar and restaurant, Mala, serves macrobiotic East-West fusion meals and superior cocktails, and commands imperious views over the resort’s unique layout from the treetops.

A 10-minute drive back to the coast to Kalim’s marketplace area brings you to Home Kitchen, Bar & Bed (314 Phrabaramee Rd; facebook.com/HOME.kitchen.bar.bed) and the adjoining Barefoot Beach Hotel, where John Underwood’s design flair comes into full fruition. All are welcome to enter and peruse the in-house gallery of artworks on fridge doors, mini-library, fantastically odd restaurant décor (the sundowners here are as good as any you’ll find in Phuket) and on-trend rooftop space overlooking the Andaman.

Karon, by contrast, feels mass-market rather than niche-audience, all souvenir markets and utilitarian restaurants. But a handful of repurposed houses away from the beachfront such as Anan (444/2 Soi 18 Patak Rd, Karon; phuketdir.com/ananhouse), a little hostel with a cheery café, do up the hipster quotient.

The next day, after admiring the Old Town’s heritage standouts — the original Standard Chartered Bank, the exquisite Kasikorn building — I plunged headlong into the bizarre at the island’s oldest hotel, The Thavorn (74 Rasada Rd; thavornhotel.com), built by a family of tin-mining tycoons in the early 1960s. The fusty lobby seems to have remained untouched since its construction, but the adjoining museum (THB30 entry!) takes the time-capsule concept to another level — it’s a dusty old repository of figurines, furniture, film posters and photos, typewriters and telegraphs. This chaotic assemblage of ephemera exemplifies Thailand itself, at once ludicrous and lovable.

For an equally alternative perspective, the Upside Down House (51/11 Bypass Rd; upsidedownhousephuket.com), with its A-Maze-in-Phuket labyrinth, literally turns your world on its head. A marvel of imagination and engineering, its three floors replicate a family house with topsy-turvy contents, the highlight being the bathroom with its inverted toilet attached to the ceiling.

Right next door on Bypass Road, the inescapable John Underwood’s giant workshop, the Underwood Art Factory (49/6 Moo 5, Chalermphrakiat Ror 9 Rd; underwood-phuket.com), makes a spectacular gallery in itself. In this wonderland of chandeliers and oddball sculptures, contented dogs roam lazily around scattered guitars that bear testament to this space’s former alter ego as a concert venue. A music showcase, Lost Legends, was staged here among the recycled metalworks before the Factory started a new life as a casual restaurant.

Decamping to Phuket Town’s restored Sino-Portuguese shophouses felt like a natural, retromodern progression. Many neighborhoods across Asia have undergone similar gentrification, but none with quite such eye-catching panache as this old center for the tinning industry. What’s heartening is that old businesses remain intact, leading to curious juxtapositions on Thalang and Krabi Roads such as a mechanic’s workshop next to a boutique hotel, or a Thai dessert vendor next to a trend-conscious café.

Vivid murals like the Ang Ku/Pigeon diptych off Soi Rommanee enliven the streets, sponsored by crowdfunding campaigns like F.A.T. (Food, Art, Old Town) Phuket and executed by collectives such as So Phuket. This is large-scale hipsterification in the best possible taste, and with the best possible outcome for the local people — the town’s character remaining intact and its denizens’ livelihoods safeguarded even as its streets are injected with new color.

Some of these traditional operators have taken on surprising new forms. Among the shophouse merchants lining Yaowarat Road, Anfield Café (16 Yaowarat Rd; +66 7621 1139) — a Liverpool fan’s gastrobar festooned with soccer memorabilia — is an unlikely outlier. Opposite, Rockin’ Angels Blues Café (55 Yaowarat Rd; +66 89 654 9654), owned by Singaporean Patrick Chua, pays colorful homage to the music of the Deep South with nightly gigs and walls laden with vinyl platters.

I checked in at The RomManee Classic Guesthouse (4 Krabi Rd, Phuket Town; therommanee.com), a converted family home on Krabi Road, to find effusive owner Teerapong “Boy” Keatipanpattana, a former Patong resident, bemoaning the fate of his old hometown. “I moved here [to Phuket Town] 10 years ago. When I go back there now, I feel sad,” he confided as he gave me a lift to the Natural Restaurant (62/5 Soi Phutorn, Bangkok Rd, Phuket Town, +66 7622 4287).

Dining at this famously strange four-floor eatery is like spending a night in an eccentric millionaire’s conservatory. There’s little rhyme or reason to the decoration — with its aquariums made of old TV sets and random sculptures, it’s a semi-al fresco complement to the Thalang Museum. Yet it guarantees fun and fascination for any diner.

My final day of sampling Phuket’s unsung treasures started on Thalang Road. Bookhemian (61 Thalang Rd; facebook.com/bookhemian), which combines a café, bookstore, exhibition space and small cinema, is by far the most intriguing outlet on this street. The kitschy Rose Espresso fulfilled my breakfast and air-con needs before an enlightening hour at the beautiful Thaihua Museum (28 Krabi Rd, Phuket Town; thaihuamuseum.com) — an object lesson in curation and storytelling which reminds us that decades before Bangla Road started, well, banging, Phuket thrived happily free of tourists with its lucrative tin, prawn-fishing, timber and agriculture industries.

Tucked away on the south-eastern coast, Rawai is one of the island’s most multifaceted districts — a rich man’s playground, fisherman’s harbor, holidaymaker’s village and barfly’s haven all in one. Phuket Art Village (28/68 Soi Naya 2, Rawai), a clutch of bohemian studios down a quiet side road, is perfect for casual pottering. Some of the art is on sale, but browsing is equally encouraged. Engrossed in painting, the artists here seem either oblivious or indifferent to strangers maundering around their workplace.

Phuket’s no stranger to the boutique pleasures of life — just ask guests at luxury resorts like Amanpuri, Trisara and Andara. But even frequent visitors might be unaware it harbors an award winning rum distillery. Chalong Bay Rum Distillery (14/2 Moo 2, Palai Soi 2, Tambon Chalong; chalongbayrum.com) was set up in Rawa’s hinterland in 2012; international recognition soon came its way, and a marquee for guests to sup on cocktails was set up next to the distillery, hidden in a field of palms and sugar cane.

Here I sat with a group of French visitors, sipping a cinnamon mojito, unaware the upcoming tour — delving deep into the complexities of distillation — would be in their language, not mine. It turned out the brilliant Thai guide, Netty Sukragsa, had grown up in Paris and spoke four languages fluently. While berating myself for assuming it would be in English, I drew comfort (and humblebragging rights) from the fact I understood 95% of Netty’s talk anyway. Pleasantly woozy, I sat back for the short ride to the airport; without realizing it, I’d saved the best for last.