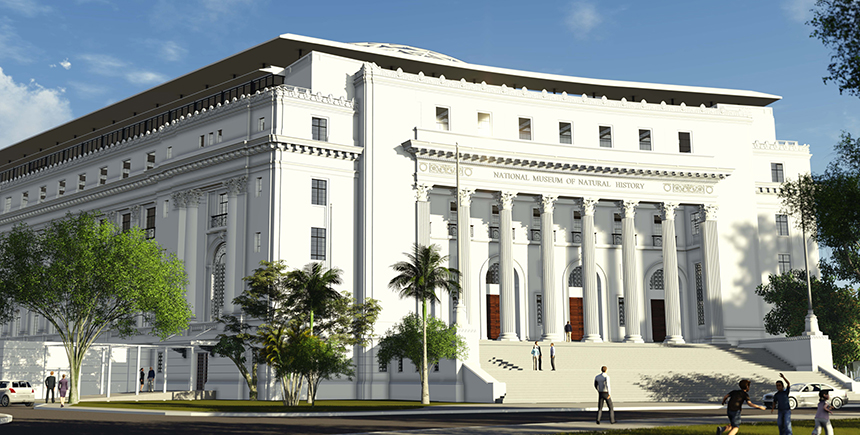 Locals and visitors will have an exciting new landmark to look forward to before the year ends: The National Museum of Natural History in Rizal Park, Manila. Work is under way at the former Department of Agriculture and Department of Tourism building, and the design team can’t wait for people to see their favorite areas — such as the Marble Hall and central courtyard with the Tree of Life. “Seen from outside, the glass dome — which is 40m in diameter and composed of alternating panels of glass and aluminum — sits perfectly on the neoclassical façade of the existing Antonio Toledo building,” says architect Dominic Galicia, head of Dominic Galicia Architects.

So what can we expect? “The lift inside the Tree will take you to the fifth floor, which houses the geological exhibits and complex origins of our archipelago. You may then walk down to the fourth level for terrestrial life forms,” explains Tina Periquet, principal designer of the interior-design firm Periquet Galicia. Afterwards, you can proceed to marine life on the third floor, and the Palawan-themed galleries on the second floor.

The project is not without its challenges. First off, it is both a heritage and an old office building, so certain features had to be maintained. They also had to consider the air ducts, pipes, ceilings, foot traffic and weight of the exhibits. And then they had marry all these with their vision of a contemporary space. Technology and sustainable solutions — like their use of proper ventilation, LED lights and windows that can let in as much natural light as possible — are helping them to realize this transformation.

In the end, the goal is clear. “We want the museum to tell the story of this country, in a setting that reflects our heritage as a fusion of Western, Eastern and indigenous bloodlines and cultural influences — a fitting showcase for the Philippines as one of the richest repositories of biodiversity on the planet,” concludes Tina.

For updates about the National Museum of Natural History, visit www.nationalmuseum.gov.ph.