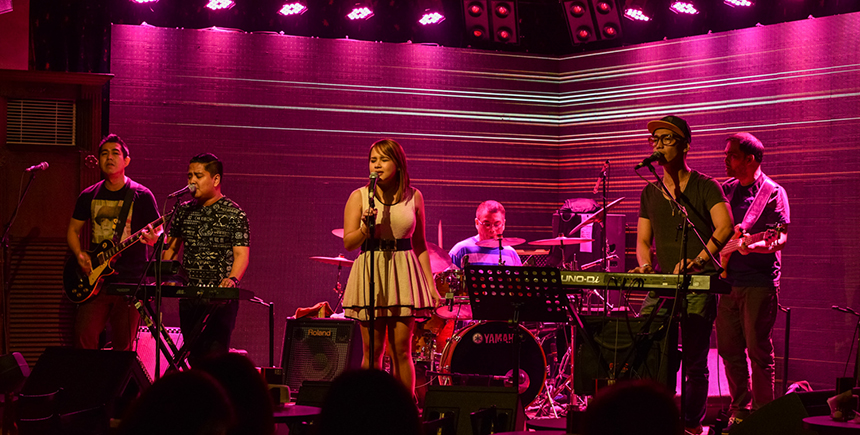 In Metro Manila, you’ll never be hard-pressed to find venues that showcase the creativity and showmanship of Filipino musicians. Some feature veteran performers who play familiar music from a treasured time in your life. Others celebrate and push certain genres to their limits — places where the young and often brilliant cut their teeth and cultivate their original sound. Here are five of the best establishments that provide a home for the local live-music scene, and represent the breadth of genres embraced by locals.

Since 1992, The 70’s Bistro has been known as a place where musical legends play and audiences feel at home. It began by featuring Filipino folk and rock legends such as Asin, Juan de la Cruz Band and Noel Cabangon; today, the bar showcases many different genres, including world music, blues, reggae and rock, with contemporary rock artists also gracing its historic stage to provide new blood to the music scene.

Fans come here to look back on Filipino rock history or catch a glimpse of their musical heroes, especially since the roster of featured artists seems straight out of a Rock N’ Rhythm issue, including The Jerks, Color It Red, Parokya Ni Edgar, and the former Eraserheads members’ new bands. Every now and then, The 70’s Bistro hosts Beatles Night, when the place packs out to see an all-star Pinoy rock ensemble performing Beatles covers until the wee hours.

Another come-as-you-are venue in Quezon City where both music fans and newbies can enjoy live music is Route 196. Its location close to two major universities attracts a young crowd eager to listen to original music by independent Filipino artists, who in turn often meet here for a drink or 10 to admire their musical peers. The venue proudly promotes itself on social media with the hashtag #MusicLivesHere.

Come the weekend, Route 196 usually houses productions that feature independent musicians from the local rock scene — nights when regulars dance without inhibition to the music or lustily sing along on livelier nights. Meanwhile on weekdays there’s an anything-goes mentality, with evenings that celebrate other types of music such as hip-hop or pop. Every third Tuesday of the month the bar holds Singalong Chooseday, where anyone can come up on stage and sing a song of their choice with the help of the house band. Route 196 also regularly holds a show called STRIPPED, where vocalists of local bands go solo and perform their favorite songs to show fans a different side of their musical idols.

Tucked in a nondescript corner of Quezon City, TAGO Jazz Café fits the romantic image of an underground jazz club: a dimly lit interior where regulars and cool cats come to indulge in musical reverie summoned by the experts in the genre. Artwork by under-the-radar visual artists decorates the walls,
giving the bar an otherworldly feel that somehow seems ideal for listening to jazz.

Serving up a blend of Filipino legends and upstarts who want to explore the genre’s more experimental and technical aspects, the music played here couldn’t be further from the commercial jazz tunes performed at most entertainment lounges. Even better, TAGO’s intimate set-up allows you to enjoy avant-garde jazz up close, as there is no demarcation between performer and audience. As you observe the playing quirks of each musician — a bop of the head, a slip into a trance — you slowly find yourself ensnared in the storytelling nature of the music, moved by the flutter of sticks on a drum. Although humble in appearance, TAGO Jazz Café is a welcoming home for people with a passion for “just jazz”.

What started as an al fresco restaurant in 2003 has evolved into an entertainment venue that regularly showcases Manila’s best musical artists. Today, 19 East is deservedly legendary among local musicians for its great sound, which owner Wowee Posadas attributes to proper acoustics.

In his years playing with a variety of acts as a session keyboardist, Wowee observed how other music joints lacked in sound quality and decided to apply his knowledge to his own venue. With the proper installation of acoustic panels and musical equipment, 19 East provides a crisp sound that allows both the audience and performers to experience the music the way it was intended. It’s no wonder, then, that the venue is a favorite of famous acts such as Up Dharma Down, True Faith, Freestyle and Urbandub.

Wowee invites the artists he admires to perform at 19 East, whether they play rock, R&B, soul, jazz or pop — and his eclectic curation makes for a varied, high-quality line-up that draws crowds from all over Metro Manila.

One of the best ways to shake off a busy workday is to meet friends for drinks, but a dash of music speeds up the process, and this is the Strumm’s formula for drawing in the customers. Located in the heart of Makati City, this is the place where people go to relax and lose themselves in the music they grew up with.

Since 1992, Strumm’s has featured seasoned Filipino musicians who play music from the past with a sprinkling of contemporary hits, celebrating music that has pleased listeners throughout generations. Retro hits from the ’60s, ’70s and ’80s get the crowd up and dancing when performed by Juan Miguel Salvador’s Authority and Route 70, while blues and smooth jazz by artists such as Wally Gonzales, Bratpack and The Blue Rats can be enjoyed on other nights.