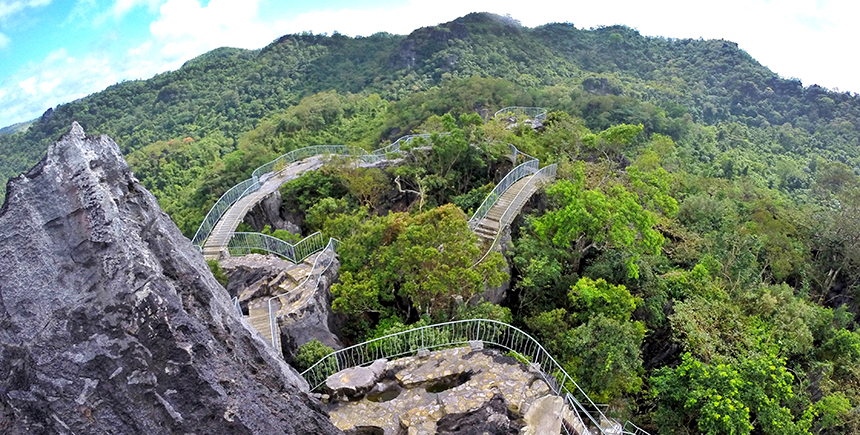 At the Masungi Georeserve, a conservation area covering more than 1,500ha south-east of Metro Manila, you can test the limits of your willpower along the Discovery Trail, a five-hour traverse across difficult terrain. A member of the Dumagat people — who are indigenous to Masungi — will guide you around the dramatic karst landscape and across one of the reserve’s most prominent features — the man-made “Sapot”, a giant spider web fashioned from industrial-grade steel.

Apart from the workout, the top of the web promises another breathtaking reward: magnificent views of the Sierra Madre, the country’s longest mountain range, on one side, and its largest lake, Laguna de Bay, on the other. At the end of the course, you’ll have burned a lot of calories and gained a significant education on the ecological workings vital to our existence.

It took decades of conservation work involving the entire community to restore the once-gravely deforested karst terrain, and now Masungi stands as a model of sustainable tourism, providing the local town with a livelihood, preserving the landscape along with the fascinating wildlife that thrives within the park, and giving everyone a much-needed breath of fresh air.

Also read: 8 natural wonders you must visit in the Philippines

These efforts were rewarded at the Climate Adaptation Summit in January 2021, where the Masungi Georeserve was presented with the Water Changemakers Award. “Our winner is a youth-led movement from the Philippines, the Masungi Georeserve story, an inspiring campaign for watershed restoration and reforestation led by the next generation of water changemakers,” Global Water Partnership Chair Howard Bamsey announced at the Water Anchoring Event of the Climate Adaptation Summit on January 25, 2021.

To experience the Discovery Trail, fill out the trail-visit request form at masungigeoreserve.com; to help preserve the reserve, check out Masungi Georeserve’s Facebook page or Instagram feed.

This article originally appeared in the April 2016 issue of Smile magazine.