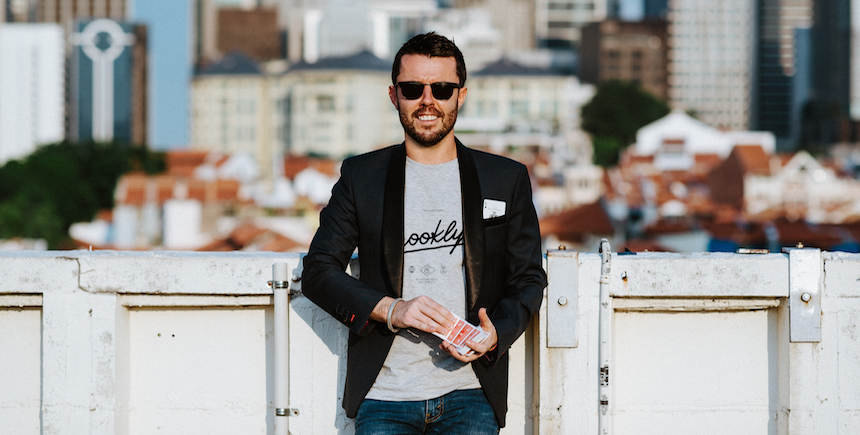 Although magician Sean Borland seems to be everywhere right now — on Singapore TV as co-host of science and magic show AbraUreka (which debuted over the local okto channel in October), performing in global cities such as London, Las Vegas and New York — he spends most of his time in the remote island of Sumba, west of Bali, where he regales guests of the upscale and exclusive Nihiwatu resort with sleight-of-hand trickery as they dine by the sea. It’s a long way from his hometown of Glasgow in Scotland, but the road to magic stardom has been paved with memorable trips he wouldn’t trade for anything else.

“The most challenging thing was taking the first step into full-time performing and finding ways to pay the rent. Paid gigs were very hard to find as a newcomer, so I turned to busking to get my name out there.”

“I’ve always had an interest in meditation, so while I was in Cambodia I signed up for a retreat at a center called Hariharalaya in a traditional village 15km from Siem Reap. One thing led to another, and I ended up as the general manager. Spending time with like-minded people from all over the world and exploring human potential on a full-time basis was such a dream. Reading and studying in the awesome library (over 2,000 books) was a big boost to my magic. The daily yoga, meditation and vegan diet meant I was also super-healthy and fit.”

“TEDx Ubud was amazing! One of the best experiences of my life. It had been a lifelong dream to perform at a TEDx event, and especially at such a beautiful location. Also in Bali, I got to put on a show with my favorite artist, Charles Clapshaw, at my favourite venue, Métis. We called the show ‘Magic Art’ and it was a great success!”

“I had my birthday while I was filming AbraUreka in Singapore, and went to see a play called Hotel with my co-presenter Cheryl. It was a great way to discover more about the diverse and fascinating history of Singapore. I can’t wait to do more exploring.”

This article first appeared in the December 2016 issue of Smile magazine.