This is how Japan’s shinkansen started a global rail revolution

Japan’s bullet train become an instant icon when it was launched 52 years ago. Danielle Demetriou tracks how it has stayed on the cutting edge of design

A shinkansen at Tokyo Station 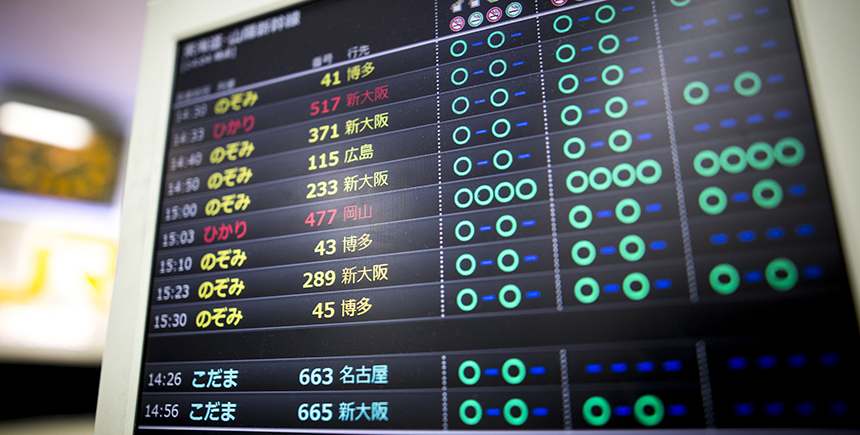 Train schedules on a station board 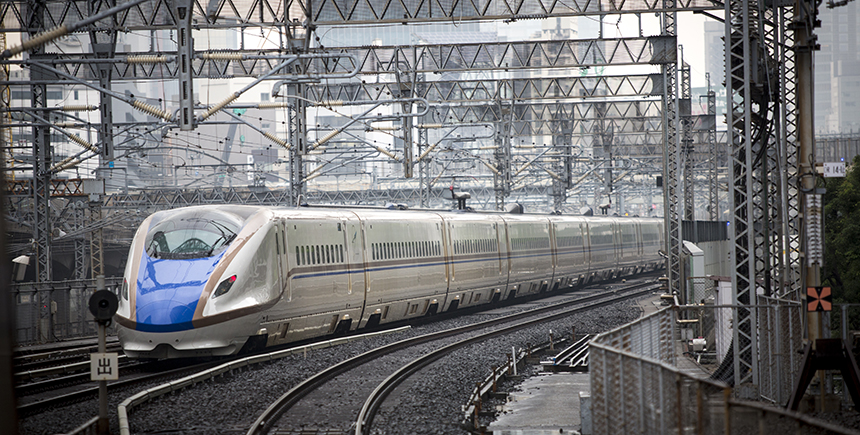 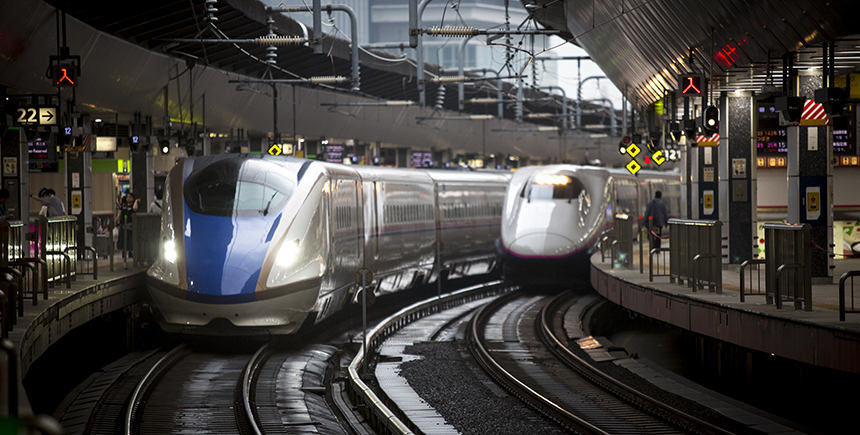 The Hokuriku Shinkansen pulling up the track alongside the E1 Series 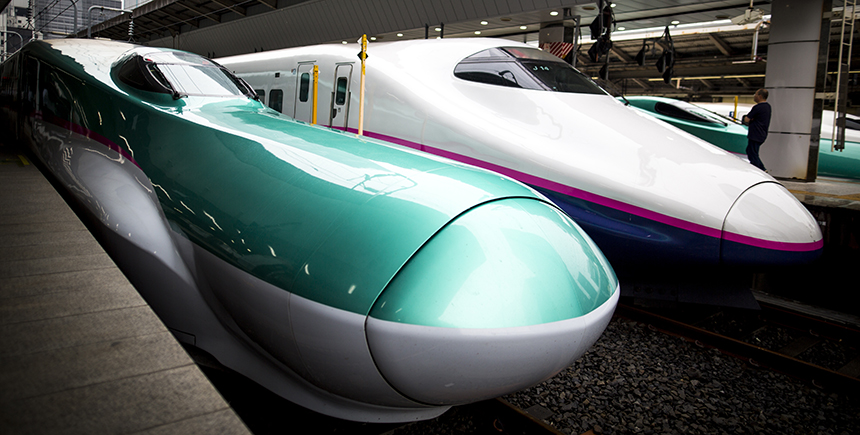 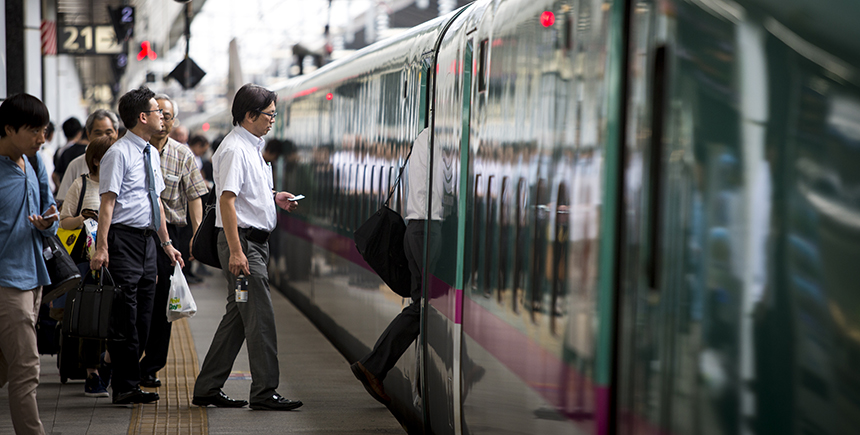 Passengers board an E5 Series Shinkansen 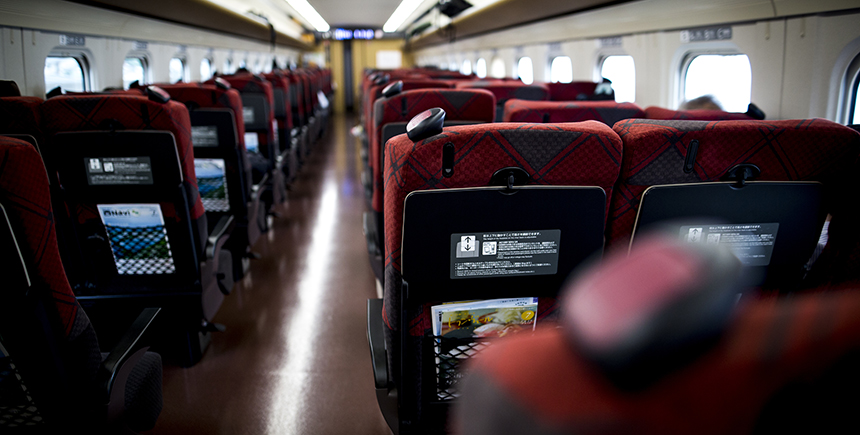 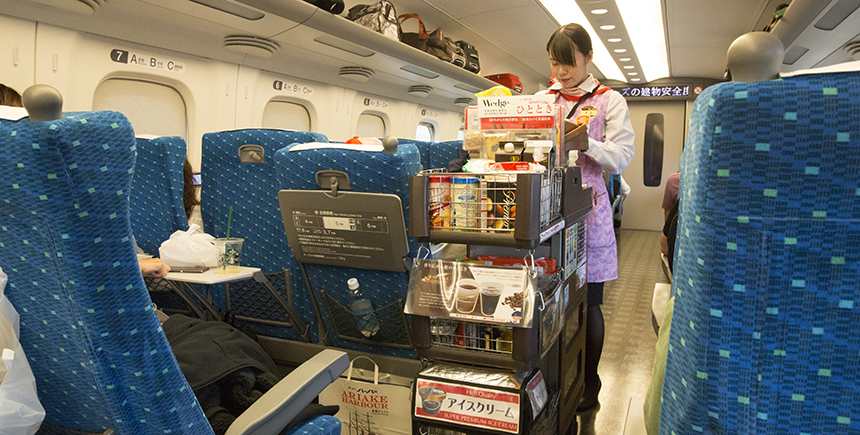 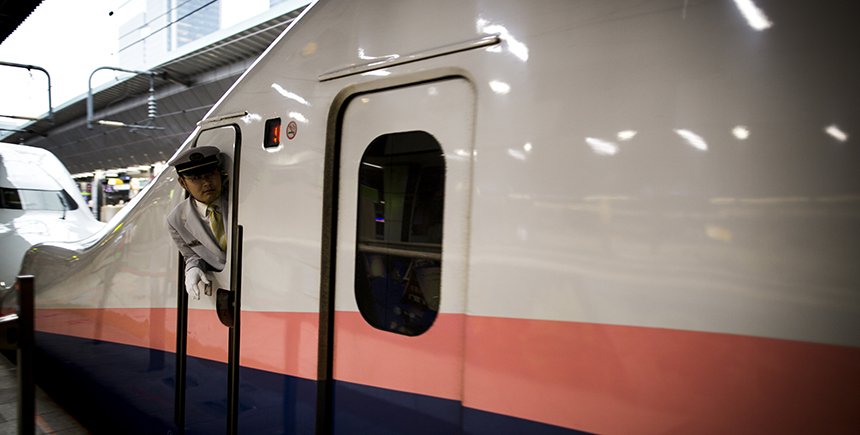 A conductor peeks out the window of an E1 Series Shinkansen 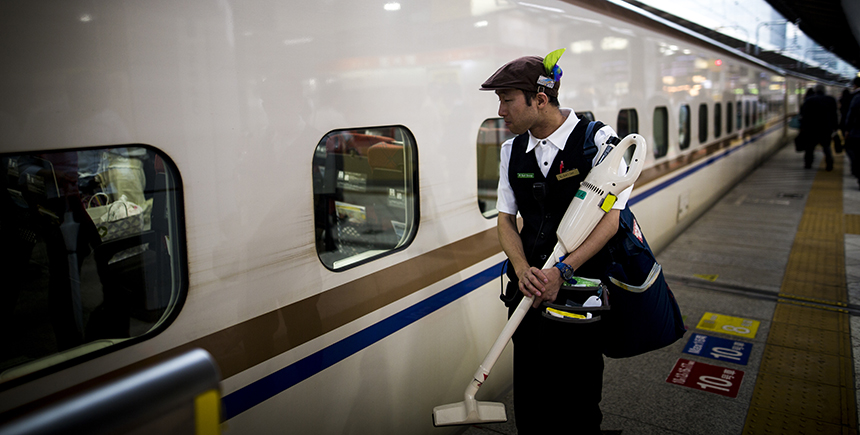 A cleaning service staff works on the Hokuriku

Japan’s groundbreaking bullet train got its name because of its speed, of course. When it was unveiled to the world on 1 October 1964, the new high-speed line linking Tokyo and Osaka reduced travel times between Japan’s two biggest cities from six hours 40 minutes to just four hours — not quite faster than a speeding bullet perhaps, but still clocking a heady 210 km/h.

Also read: How to navigate Tokyo like a pro

Its moniker also pays homage to the train’s distinctive bullet-shaped nosecone. “The nose of the train is really what became iconic,” says Paul Priestman, founding director of PriestmanGoode, a leading London-based aircraft interiors and transport design studio. “The design of the nose is crucial for the aerodynamics of a train that travels at high speeds.”

The train’s streamlined form minimizes wind resistance at high speeds, and that’s just one of many technological features that help it run swift and sure. The carriages, for instance, are attached to airspringfitted flatcars, which cushion vibrations from the wheels to ensure a smooth journey for passengers.

An entirely new network of railway tracks was also launched along with the bullet train. These were specially designed so that the trains could travel routes that were as straight as possible, without any sharp curves. As these trains were deemed too fast for direct human monitoring, an automated speed-control system named Automatic Train Control was developed for it that would eventually revolutionize railways worldwide.

The interior design of these trains is important as well, Paul points out. Indeed, there are few more memorable (or comfortable) travel experiences than settling into the pleasantly minimalist interior of a bullet train, where you can sink into a comfortable reclining chair, plug in a phone to charge it, and watch the world outside whizz past the windows.

Investment in top-notch design has continued to go hand in hand with the evolution of high-speed rail in Japan, with a string of high-profile industrial designers involved in creating landmark trains. Among them is Eiji Mitooka, the renowned industrial designer whose train creations include the award-winning 800 Series Shinkansen created for Kyushu Railway Company.

These trains also showcase Japan’s famous omotenashi hospitality culture. White-gloved conductors bow politely as they enter carriages to check tickets, and an army of cleaners dressed in pink conduct top-tobottom cleaning of each train in seven carefully choreographed minutes when it reaches its terminus.

This signature attention to detail even extends to the poetic names given to specific shinkansen (the Japanese term for bullet trains, meaning “new trunk line”). The two inaugural trains were called Hikari, Japanese for “Ray of Light” — an appropriately uplifting name, since these high-tech trains were viewed as symbols of Japan’s rapid recovery following its defeat in World War II. Subsequent train names have included lyrical monikers like Nozomi (“Hope”) and Kodama (“Echo”).

This devotion to design and detail is important for the bullet train’s future prospects. “High-speed train travel will be key to developing a more sustainable future. If we want passengers to get out of their personal vehicles and use rail instead, we need to ensure that the experience is comfortable and caters to a variety of passengers, whether they are families going on holiday or business travelers,” says Paul.

The idea of a high-speed railway network was first broached in Japan in 1887 — only 15 years after the launch of the nation’s very first train, which linked Tokyo with the city of Yokohama. But these early plans were thwarted, first by financial and logistical constraints and later, by the tumultuous progression of World War II, with early construction work on tunnels halted by 1943.

When Japan finally unveiled its high-speed train, it did so just days before the high-profile opening of the 1964 Tokyo Olympic Games. The shinkansen became an instant success, serving more than 100 million passengers within its first three years. “It was a world away from any other train in the world”, says Paul.

Launched at a time when many other countries were more inspired by the potential of air travel and looking to the skies, Japan’s inaugural bullet trains broke new ground for land travel and kickstarted a global high-speed rail revolution. Fast forward 52 years, and these trains have endured not just as a symbol of Japan’s dramatic post-war transformation into an economic powerhouse — it is also undoubtedly one of the most iconic industrial creations of the 20th century.

Today, Japan’s bullet train network comprises more than 2,764km of shinkansen lines, which crisscross the country’s mountainous archipelago from southern Kyushu to northern Hokkaido at speeds topping 320 km/h. Expansion plans are constantly under way, and the trains are consistently upgraded.

Japan’s bullet train experience is not just about speed — it’s also a form of transport that has proved to be remarkably safe and punctual. The shinkansen has served over 10 billion-plus passengers since 1964, and in all that time has had a zero fatality rate in relation to derailments or collisions. Its track record for punctuality is equally flawless, particularly when you take into account the prevalence of earthquakes and typhoons in Japan. Annual punctuality reports consistently cite average delays at less than a minute. The cost of travelling on a bullet train may not be cheap — around ¥13,850 one way between Tokyo and Osaka (although overseas visitors can benefit from the extremely good-value Japan Rail Pass, which must be purchased before arriving in the country). However, the reliability, comfort and safety of bullet train travel has ensured its enduring popularity, with many travelers opting for the shinkansen over air travel. This means it is taking on the rise of budget airlines as a strong competitor.

Meanwhile, the future for Japan’s high-speed rail network is as ambitious as it is expansive. Current plans include bullet train line extensions to both Tsuruga in southwest Fukui prefecture and Nagasaki in southern Kyushu by 2023, plus Sapporo — the capital of Hokkaido — in 2031.

Exporting Japan’s bullet train technology overseas is also high on the government’s agenda. Such projects have already been completed in Taiwan, China and the UK, and Japan is currently building India’s first high-speed rail link connecting Mumbai to Ahmedabad. It will also be involved in creating Thailand’s proposed Bangkok–Chiang Mai line.

Japan is also investing heavily in what is deemed the next best thing — maglevs, magnetic levitation-propelled trains. The country has ambitious plans to connect Tokyo to Nagoya with a 40-minute mostly subterranean maglev shinkansen by 2027, extending this to Osaka by 2045, with a proposed Tokyo terminal built 40m underground.

Other nations have joined the high-speed rail race and are rushing to create and expand record-breaking high-speed rail networks. China, for instance, is emerging as a key player. But while the competition is heating up, Japan can always count on one thing — a celebrated reputation as the nation that revolutionalized high-speed rail travel.

“The Japanese are pioneers in high-speed train development, and the shinkansen has become the ubiquitous mark of progressive train design, recognised across the globe,” says Paul. “Producing a symbol of innovation, progress and modernity has to be a goal for any country competing on a global platform.”

Also read: Exploring the heart of Beijing by train