E! News correspondent Erin Lim dives into traveling like she does her job — with an open mind and lots of enthusiasm 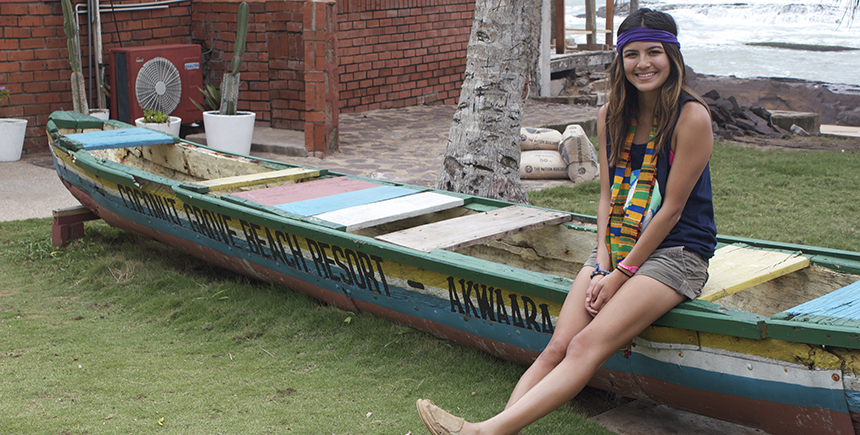 Changing jobs and adapting to a new workplace are challenging enough. But what if you had to move to another country to do it?

Other people might have paused to think, but not Erin Lim. She just couldn’t pass up the opportunity — especially if it meant working for E! Hollywood as its new host and correspondent.

Besides, she’s already done it before. Prior to the offer, the 24-year-old Filipino/Chinese-Spanish/Italian from Los Angeles took a risk, went to Singapore to explore her options, and soon earned commercial modeling stints and TV assignments. Erin presented shows such as eBuzz under Sony AXN and Storm Bytes under Tech TV; starred in the Singapore sitcom, Rules of Tham; and became a host and correspondent for E! News Asia, which made Singapore her home for two years.

Plus, since LA is her hometown (she was born and raised there), it felt like a homecoming too. “Getting the call from LA and actually landing this gig with E! Hollywood is still so surreal. I wake up every day with a smile on my face and a bit of disbelief. I’m so grateful,” says Erin, whose transfer to the E! offices in the States was even chronicled in the E! special Erin Goes to Hollywood.

“Sometimes when I talk about my life in Asia, I’m still surprised I had the balls to move 9,000 miles away from home or Hollywood itself to chase my dreams,” Erin reflects. “Thinking of all that I’ve done in a quick two years always brings a fat smile to my face.”

But now it’s down to business. “Working for E! is completely fun and glamorous, but there is a whole lot more than just that,” says Erin. “We are constantly moving and on the go. Sometimes there are a couple of shoots a day in different locations. There are stories and news packages we have to produce and write ourselves.”

“The red carpets are madness,” she adds. “So many people, cameras, wranglers, lights — and so little time to get what you want. Sometimes you can get two questions for a celeb on a carpet! It’s such a crazy time but incredible.”

Her memorable moments so far? “My first interview in Hollywood was with Nick Jonas and my first red-carpet premiere was for Marvel’s Ant-Man. I’ve already interviewed Matt Damon twice and he recognized me… that’s a little insane,” she recalls.

“It’s always funny because when I’m at work and on the job, I’m completely in the zone and it doesn’t faze me. But it’s hours or days later, when I’m telling the story to someone, that I relive the experience and I think: That really happened… cool!”

Another cool thing that’s happened because of work is the chance to travel. Erin is also a producer and documentary filmmaker, with projects under her belt such as On the Cape, which was shot in Ghana, and We’re from Here in Los Angeles.

She’s got mixing business with pleasure down pat. “The only way to do business is with pleasure and play involved! Luckily for me, my career has brought me to some fascinating landscapes all over the world,” she says.

“I do make it a point to explore once my work is done. Whether it’s getting a tour from a native, hopping on a bus to a nearby cityscape, or diving into a local delicacy — you can bet I’m doing it all!”

She’s open to just about anything. “I’m an off-the-beaten-path type of traveler. I’m rugged, daring and free-spirited. I like to try different things that aren’t tainted by tourism,” declares Erin. “I like to go to the hole-in-the-wall restaurants that the locals like and trust. I don’t mind a shake-up in plans — I do spontaneous adventures. I’m also game to try exotic cuisines. Basically, I’m a little daredevil traveler.”

Erin may be one to live for the moment, but even she can’t help but look back at the time she toured South-East Asia — and in particular, the Philippines. “It took me so long to make my way to the Philippines, and once I arrived it was like I’d always belonged. I loved getting to connect to my roots and learn more about my ancestry,” she enthuses. “In addition, the Philippines [has] the most gorgeous islands in the world. Getting to see that was incredible; and nothing compares to Manila nightlife!

“Hong Kong and Bali are my other faves. HK is a mini NYC, almost, and the food is divine! As far as Bali goes, I’ll never forget surfing those awesome waves. That place is endless summer! There was so much to learn about South-East Asia and I ate it all up, literally.”

Her secret for an amazing trip is simple. “I love to take in the culture of the destination and live like an anthropologist. I love the feeling of being at one with the place I’m visiting,” she says. “I believe that the only way a culture can fully embrace you is if you fully embrace it.” You can do this too, by keeping in mind Erin’s tips.

“I struggle with this, but when I do go light it’s such a relief! I can be a heavy traveler at times, but in the end it’s superfluous stuff.”

Pack emergency toiletries and a spare outfit in your carry-on

“You never know what can happen with your checked-in luggage! Also, when you have long flights, it’s great to have a fresh set of clothes. When I traveled across the globe multiple times a year from the US to Asia and back, it was nice to change into clean clothes.”

“I’m all about having a good game plan, but be ready to be spontaneous, and go somewhere new and exotic.”

“Okay, maybe just a little. But I believe in being au naturel when traveling. In foreign climates, too much foundation on the face is a recipe for a breakout!”

Make friends with the locals

“I still keep in contact with my friends from Ghana, Singapore, the Philippines, Mexico and Hong Kong.”

“Write down the addresses of your destinations before you lose WiFi or 4G.”

Switch off your phone

“Disconnect for once, people!”

This article originally appeared in the November 2015 issue of Smile magazine.