Here are six family-friendly attractions to consider in this south-central slice of Japan, encompassing Osaka, Kyoto, Kobe and Nara 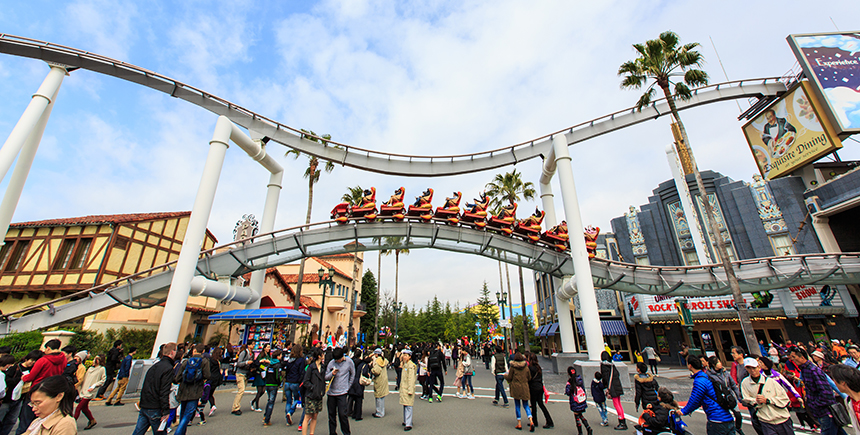 A rollercoaster at Universal Studios Japan

Home to many of Japan’s heritage sites, the Kansai region has long been considered the country’s center of history and traditional culture. Travelers searching for postcard-perfect images of old Japan find them here, in the vast landscape of temples, shrines, preserved rural towns, feudal castles and sacred mountains of Kyoto, Nara and Himeji.

Children won’t likely be too crazy about visiting scores of old temples and Zen gardens, but parents can show them another magical side to Kansai — one that’s populated by wizards, kooky playgrounds, hundreds of freely roaming deer and lurking ninjas.

With close to 12 million visitors last year, Universal Studios Japan has been a huge draw for families since it opened in Osaka in 2001. The Amazing Adventures of Spider-Man in the New York area, the backwards-traveling rollercoaster in the Hollywood area and The Wizarding World of Harry Potter are just some of the reasons visitors put up with the lines, which can often get pretty long.

Best for: Ages 4 and above, because most USJ rides have a height requirement for unaccompanied kids that starts at 92cm or 3ft.

Best time to visit: Steer clear of spring break (typically from March 25 to April 5), as many Japanese students and families with their annual passes make their way to USJ as well.

Make the most of your visit: Even if you arrive when the gates open at 9am, you should allot the whole day for USJ as you will spend a great deal of time in line for rides. Watch for supersized and fully lit-up versions of beloved characters like Hello Kitty and Snoopy in the amusement park’s final show of the day, the Magical Starlight Parade.

Insider tip: Get the Universal Express Pass — for a little more, you can jump the queues at the most popular rides.

This enormous playground for all things Lego reduces even grownup fans of the iconic Danish brick toy into squealing children. Designed to be interactive and educational, it features several attractions including a brick pool, and two toddler-friendly themed play areas — Lego Racers: Build and Test, and Master Builder Academy — where the little ones can tap into their inner Emmet (if you’ve been living under a rock, he’s the guy who saves the day in The Lego Movie).

Best time to visit: Weekday mornings (as afternoons can get packed).

Make the most of your visit: Schedule your visit to Legoland and the nearby Osaka Aquarium (aka Kaiyukan) in one day if your kids are up for it.

Insider tip: Typically, adults need to be with a child to visit during regular hours, but once a month the Center holds Adult Night for AFoLs (that’s Adult Fans of Lego).

This multi-level museum of play has a “Creativity” floor on the third level, where kids can make things with computers or learn crafts; an “Adventure” floor on the fourth level, in which a whimsical playground has slides, ladders, bridges and other wacky elements for your kids to play on; and a “Discovery” floor, where your curious youngster can safely make electricity or see the world through another person’s perspective.

Best for: Pre-schoolers and older kids, but there’s a play area for babies and toddlers, a nursing area and baby-friendly restrooms, while strollers (though limited) can be borrowed at the information area.

Best time to visit: Weekends during the school year, as weekdays during that time mean lots of students in the museum for field trips.

Make the most of your visit: Behind Kids Plaza is Ogimachi Park, where there’s more space for the kids to run around outdoors.

Insider tip: The playground on the Adventure floor, while a crazy-fun setting for playtime, might be unnerving for new parents of toddlers.

If you have energetic little ninjas in your midst, let them find their way and exhaust themselves through secret passages at the maze-like Ninja Mystery House, just one of the attractions at TOEI Kyoto Studio Park. A working film set that doubles as a theme park, it’s designed as a small town from the Edo period — so the setting might not be so attractive to kids, but hidden inside the traditional-looking structures you’ll find delights like the aforementioned labyrinth and the Haunted House. Watch out for hidden ninja and samurai lurking about as well.

Best for: Ages 8 and above

Best time to visit: Weekdays, when there’s hardly a crowd.

Make the most of your visit: Aside from the regular attractions, there is an Anime Museum and scheduled live shows. Though all are in Japanese, the slapstick-funny behind-the-scenes movie footage and samurai sword-fighting lessons don’t need subtitles to be understood.

Also read: The best things to see and do in Kyoto

With more than 1,000 deer grazing 500 hectares of greenery, Nara Park in the middle of Japan’s ancient capital is a definite kid-pleaser. Not only do they evoke images of fairy tales, but going “aww” over the deer while strolling around the park also makes for a great break from the sensory overload of amusement parks. The deer are generally tame and friendly, but can get overly excited and tend to fight for nibbles when you feed them crackers.

Best for: Ages 5 and above

Best time to visit: During fall (October and November), and spring (March to May) for the temperate climate.

Make the most of your visit: While the kids enjoy the whimsical sight of the deer gently roaming about (you’ll love it too), make sure you cross off your list the centuries-old temples located on the edge or within the park

Insider tip: The walkways around the park are mostly made from gravel, so wear closed shoes. And watch your step: as there are many deer walking around, you can expect a lot of poop on the ground.

Who needs rollercoasters when you can ride the rapids? The Hozu-gawa River Boat Ride makes for a memorable outdoor adventure for the family in one of the most scenic places in Kansai. The two-hour, 16km ride down Hozu-gawa begins at Kameoka and winds down the river through a deep, beautiful gorge, which swings from leisurely to rough as you hit rapids. Don’t be surprised if you spot snakes, turtles and different kinds of birds.

Best for: Ages 7 and older

Best time to visit: During spring and fall for the cherry blossom and the autumn colors on the mountains, respectively.

Make the most of your visit: Take a ride on the Sagano Scenic Railway from Arashiyama to Kameoka and then take the boat heading back to Arashiyama, where you shouldn’t miss the chance to stroll through the famous bamboo groves.

Insider tip: The guides don’t speak English, so sit back and just enjoy the view. At the end of the trip you and your kids can have snacks from the floating konbini (convenience store), which sells drinks and food, including tasty grilled squid.