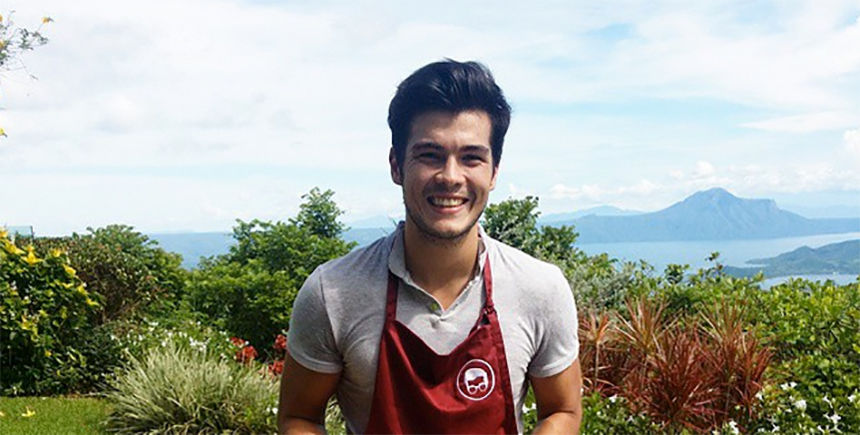 As a food blogger, restaurateur and host of the TV show The Fat Kid Inside on Star World, you’d probably guess the first order of business on any trip for Erwan Heussaff would be food.

And sure enough, gastronomic pleasures figure prominently on his itinerary. “It’s usually filled with little notes and side notes of restaurants to try, if my primary restaurant is already fully booked,” he reveals. “I also scour around for the best bars and try to hit as many as possible. Around every district or area of interest I make sure we have two or three dining options; that way I know we are never far from good food.”

But it doesn’t end there. “I love to explore new places and cultures. I’m usually not the type who lingers too long around touristy sites,” he adds. “I believe that culture is felt through a current understanding of how people live, eat, drink and go throughout their day. I am always willing to try anything and go anywhere, no matter how long it may take.”

So even when he’s busy with his website, thefatkidinside.com, producing videos on youtube.com/thefatkidinside, and helping to run eateries like Niner Ichi Nana, The Hungry Hound, Crisp on 28th and Hatch 22, Erwan finds the time to travel. He admits to having a soft spot for Europe, where he recently spent two weeks. “One friend got married in Provence, another got married in Vienna a week later. So we went a little early, passed through Paris, three cities in Brittany to get to Provence. Then we went to Istanbul and Cappadocia [in Turkey], before heading to Austria.”

In the meantime, fans would love to know that Erwan has a lot of projects lined up. He is opening more restaurants, and hosting the 24 Hours show on YouTube. “It’s an online series where I spend about 24 hours in a city and show you what the best is, and what are the things you need to try out and where you need to hang out,” he explains.

With his camera and Android phone fully loaded with apps on hand, Erwan shows us how to dig deep and savor the local experience.

Be open-minded about food

“I try everything. No holds barred. I’ll eat what people truly eat, not the stuff they want you to try because it’s a good laugh. A trip should always be balanced with popular, hyped up, on-the-international-radar restaurants (Michelin-starred, etc.) with eateries and canteens that locals rave about. I’m even more excited to try places that almost made the list, or that people are saying should be on lists next year; usually places that serve one thing, but in the best way possible. A good tool to use is Instagram, and the hashtags and geotags of the restaurants you want to try; it gives you good feedback and serves as a virtual menu of the restaurant.”

“It’s utopian to think that you will land in a new city and be spontaneous and find all the best experiences. More often than not the best is hidden from you because you’re foreign, you don’t know the lay of the land, and the locals want to keep some secrets to themselves. I’m not saying that you won’t stumble across some gems, but for that to happen you need to be in the right part of town.”

“It’ll make the locals happy. [The words for] thank you, please, hello, toilet, bill, excuse me, water, bar, restaurant, taxi, phone – all of these will go a long way.”

“If you are someone looking for a hip, underground speakeasy bar, go to the closest trendy shop, buy something and talk to the salesperson. If you want to go to a nice club, speak to a bartender and see where they usually end up after their shift. If you want to take a leisurely cultural stroll around the city, ask someone who fits the bill. Ask yourself, if you were at home, who would you ask? And try to seek out the same kind of person.”

“There is nothing worse than thinking you had a map to check, only to realize that your data services are not working and that your map is just a fuzzy blob. So download the map od the city on Google Maps before heading out.”

“Use the geotag feature on maps to drop waypoints on the locations you want to check out. That way your visit-list becomes visible.”

Go for a run

“Do so in the morning, for at least an hour or two when the city is asleep. This is the best way to experience the lay of the land and see the sites with no one around.”

“If 50 of your Facebook friends recommend one restaurant, chances are it’ll be good; but chances also are it’ll be too tried and tested, the staff will speak English, it’ll be a fairly easy menu to get around, etc. That’s not what you want. You want to be in a tiny place that even some locals don’t know about, struggling to communicate with the waiter and ready to just eat and drink whatever he wants to bring you. Each time a waiter or owner says to me, “How the hell did you hear about us?”, it brings a smile to my face.”

Travel in a small group

“Traveling in a small group of up to five people is ideal, but make sure you are with like-minded people, everyone discusses what they want to do, and one person takes the lead in organizing the day. Make sure everyone is given a time to be out of the house and ready to explore. Manage everyone’s expectations.”

“Whenever you can (unless you’re in a large city for a couple of days only, of course), drive from city to city. It’s the best way to see a country. Road-trip it. Spend one to two days per city or village, depending on the level of interest, and move on to the next town.”

This article originally appeared in the August 2015 issue of Smile magazine.