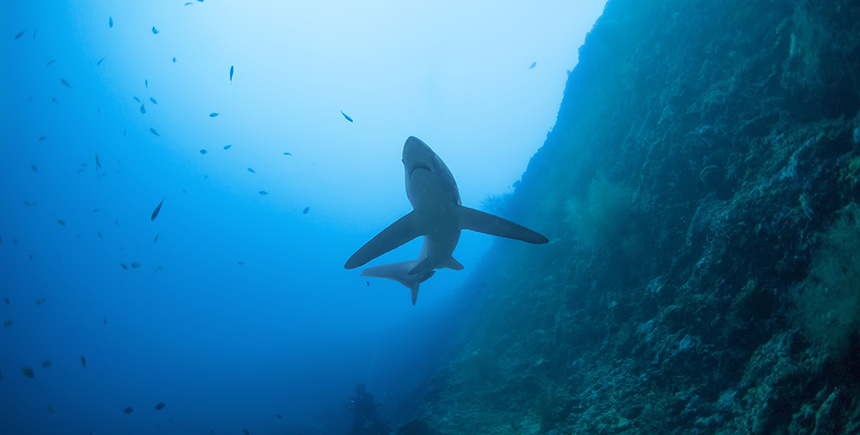 A shark in the waters of Malapascua

Malapascua is a tiny island — just 2.5km long, and barely 1km wide at its narrowest point — found a little under 7km away from the northernmost tip of Cebu. And yet it leaves a deep impression: make the (long) journey there just once, and you’ll always want to go back.

Some of its charms are immediately apparent: Bounty Beach, with sand so fine and white that the word “powdery” doesn’t begin to do it justice, has been a secret Cebuano hideaway for many years. However, with nothing else on the island except for the few fishermen’s houses, there had been little other reason for visitors to make the journey — it’s about four hours overland from Cebu City, and then another 30 minutes by boat — for anything other than a day trip.

This changed in the late 1990s, when Cora Macabale and Dik de Boer, upon hearing many tales of long-tailed thresher sharks and manta rays from the local fishermen, recruited their friend Mikael Persson to help investigate. Lugging their own equipment to the off-the-grid island was no mean feat, but their efforts paid off: they discovered the underwater plateau called Monad Shoal, and upon it circling thresher sharks.

These distinctive creatures have long, whip-like tails that can grow as long as their bodies; though not endangered, they’re rarely spotted by humans because they stay mostly in the deep. Monad Shoal, however, provided a unique arrangement for the threshers. The top of the shoal was patrolled by cleaner wrasse who liked to feed on pests that plagued the sharks, and so the sharks learned to go up to the shoal to meet with the friendly fish. Thanks to the discovery, Monad is now recognized as the only place in the world where thresher sharks can be spotted regularly in recreational-diving depths.

Malapascua has boomed since then, thanks largely to travelers who go there to scuba dive. But it has also remained quiet, rustic and full of Cebuano charm, helped along both by co-operative resort owners who keep the beach clean and free from overdevelopment, and by dive operators who help educate visitors about conservation efforts. And, as of July 2015, two of Malapascua’s sites — Monad Shoal and Gato Island — have been designated as the country’s first shark and ray sanctuaries, thanks to a municipal order by Mayor Augusto Corro.

A perfect day on Malapascua could have one waking up with the dawn to dive with the threshers in the early morning, followed by sunbathing on the white beach, or perhaps a leisurely stroll throughout the entire length of the island. If one were so inclined, another dive could follow in the afternoon, this time to see gentle manta rays coming up to feed, or to find nudibranchs in the shallows. There’s another dive site marked for night dives, full of phosphorescent sea life dancing in the warm liquid darkness.

Malapascua has been visited by countless divers, along with journalists, scientists and film crews who come from all over the world — to study the thresher sharks, to experience the incredible diving in the area or simply to chill out on the island. I’ve known no one to visit who leaves without indelible memories.

Also read: Freediving in the Philippines