Why is Barangay Balili in Benguet so Colorful?

The hillside houses of Barangay Balili in La Trinidad, Benguet have been transformed into one massive work of art. 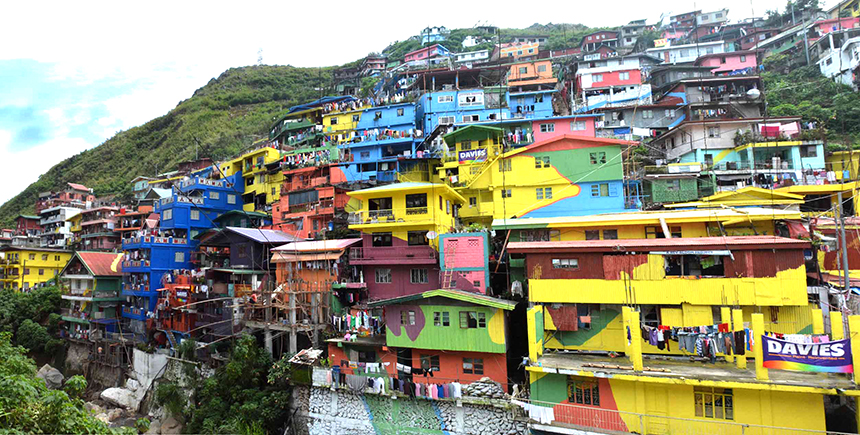 If you’re heading to the strawberry fields of La Trinidad, Benguet, you’ll be greeted by a colorful sight — a sunflower mural painted on 170 houses located on the hillsides of Barangay Balili. The Department of Tourism for the Cordillera Administrative Region (DOT-CAR) officially unveiled this colourful street art along Kilometer 3 in La Trinidad, Benguet in June.

Part of DOT-CAR’s Rev-Bloom (Rev up, Revive, Revisit, Revitalize) Urban Rehabilitation Campaign, the mural was painted by a team from Baguio City artists’ colony Tam-awan Village, together with volunteers and residents from the barangay.

The project is called “Colors of Stobosa”, a reference to the three sitios covered by the project: Stonehill, Botiwtiw, and Sadjap. The mural’s design was conceptualised by artists Jordan Mang-osan, Clinton Aniversaryo, Ged Alangui and Jenny Lorenzo. “There were four designs and we joined them together. We chose the sunflower theme because this area used to have a lot of these flowers,” explained Mang-osan.

DOT-CAR is planning to implement a similar project in Baguio City in time for next year’s Panagbenga Festival. A particularly suitable site is Quirico Hill, which is three times wider than Barangay Balili.