Climbing Mount Pinatubo with a four-year-old in tow

Husband-and-wife mountaineers Eduardo and Sharlene Bedural are known for trekking with their toddler, Wyatt. We trail them as they conquer Mount Pinatubo 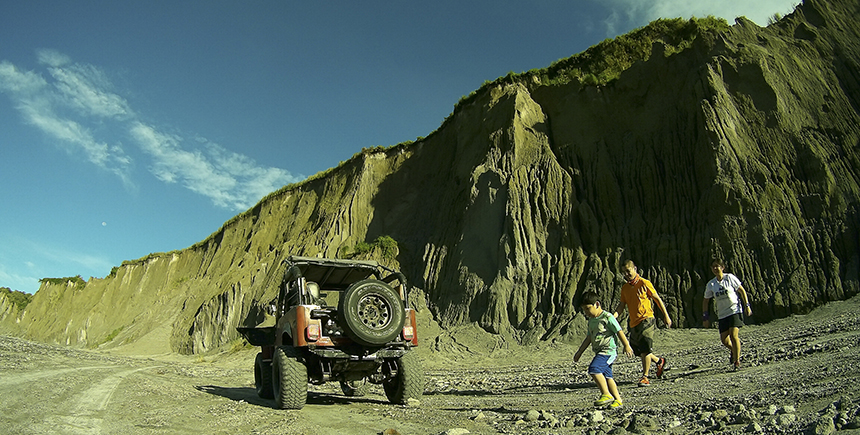 Embarking on the trail 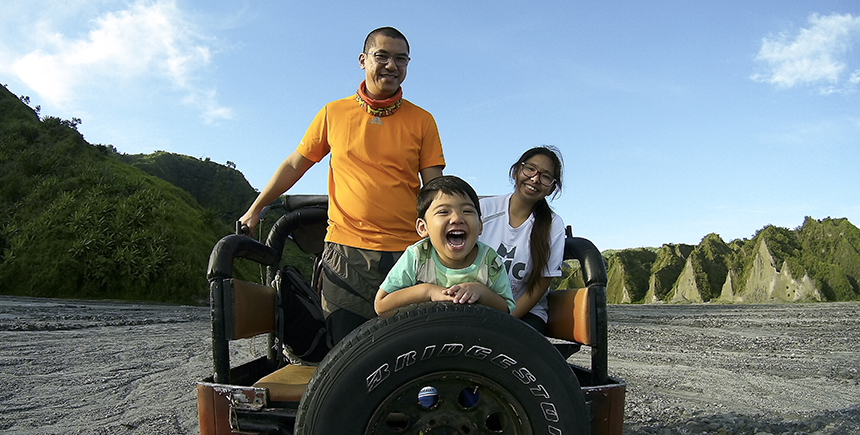 Riding the 4x4 to the starting point 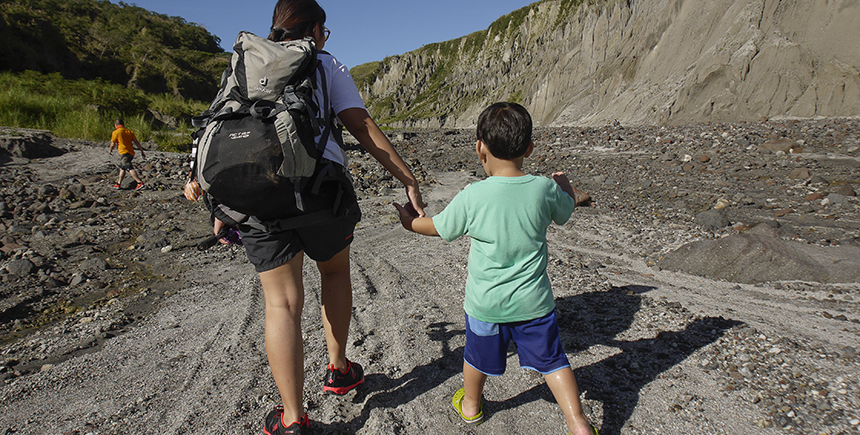 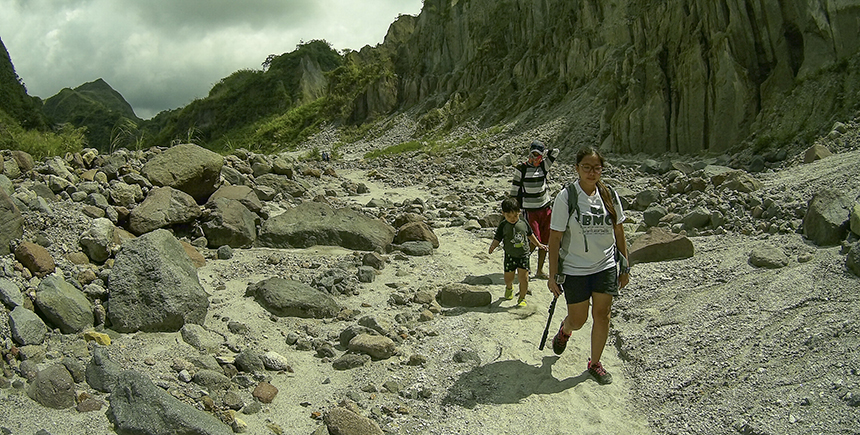 Halfway up the trail 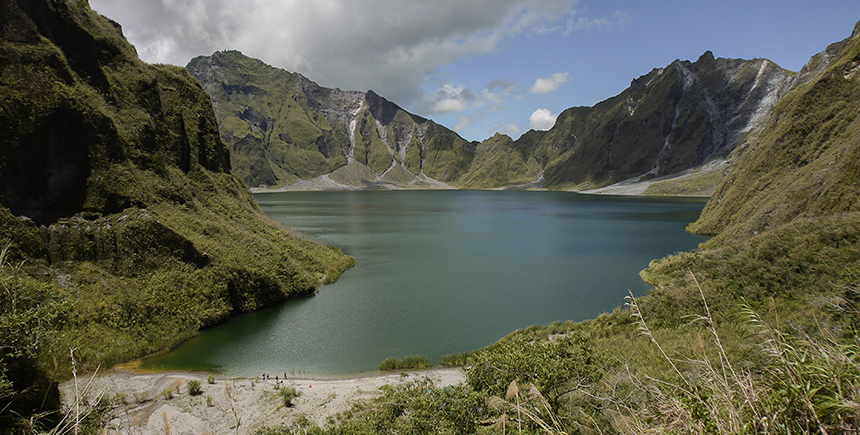 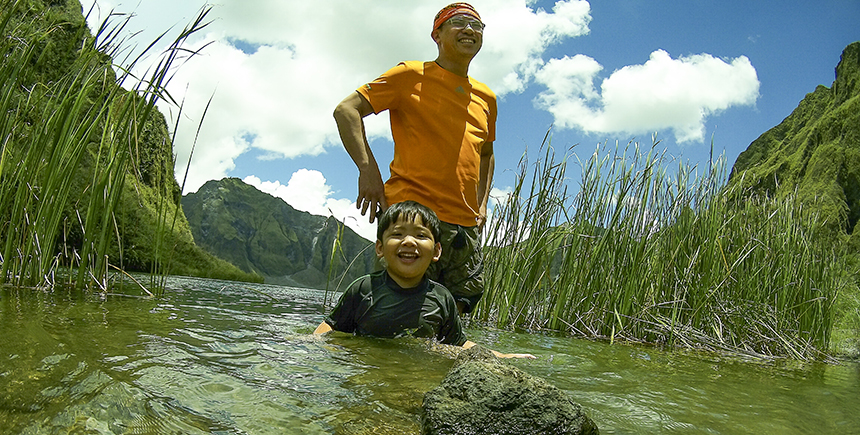 Cooling off with a refreshing dip

Morning finds me on the back of a 4×4 jeep, barreling down a dusty, rocky pathway in the province of Tarlac. I am en route to Mount Pinatubo for a scenic trek that attracts thousands of tourists each year. But today’s climb is far from routine. I will be walking with a rather famous hiker — Wyatt Maktrav Bedural, a four-year-old who completed his first trek when he was just eight months old. Today’s Mount Pinatubo expedition will mark his 40th climb.

Of course, Wyatt’s parents Eduardo and Sharlene have been along for every single one of these treks, including the one we are embarking on today. They run Nomad Since Birth (wyattmaktrav.com), a popular mountaineering blog that turned their son into an unlikely star. When Sharlene was pregnant with Wyatt, the couple missed climbing so much that they decided to trek to the summit of Pico de Loro in Cavite when Wyatt was a few months shy of his first birthday.

“We missed the outdoors so much but we couldn’t bear to leave our baby at home, so we decided to just bring him with us,” Eduardo reveals. Wyatt completed that trek on his folks’ backs, and more expeditions followed as he grew older. This smiley, stocky boy has already climbed four of the Philippines’ highest peaks — Mounts Apo, Dulang-Dulang, Pulag and Kitanglad.

Such feats have earned the Bedurals a substantial internet following. Their blog has been featured in online magazines, and the trio has appeared on numerous local TV documentaries. While most parents would hesitate to bring their toddler on a rugged hike, these guys obviously know how to mount a family-friendly adventure. How exactly do they pull this off? That’s what I’m here to find out.

Our 4×4 drops us off at the starting point for the 7km trek. Before us, the jagged moonscape of Crow Valley spreads out, a swathe of once-deadly pyroclastic material that spilled from the nearby volcano. Mountains of igneous sand surround us, and rocks of all sizes lie beneath our feet. These are fearsome reminders of the destruction wrought by the eruption of Mount Pinatubo on June 15, 1991. I remember seeing Manila blanketed in ash that day, despite the fact that the city was 150km away. In the neighboring provinces of Pampanga, Zambales and Tarlac, the devastation turned vast areas into wastelands.

“We’ve always wanted to climb Pinatubo but never had the chance until now,” Sharlene confides as we begin the hike up the rocky, sandy highway of dried-up lahar. Despite her bookish appearance and fair complexion, this lady is a veteran climber who placed first in a mountaineering competition in 2011. She met Eduardo, a fellow enthusiast, during a hike in Batangas. After a three-month whirlwind courtship, they tied the knot.

I ask the couple how their trekking days have changed now that they are two-plus-one. “I’m just happy to be able to keep climbing mountains”, Eduardo admits. “We’ve had to slow down the pace of our treks and carry double the amount of supplies, but that’s normal. Our priority is for our son to be safe and well cared for.” He muses that his backpack is now mostly filled with clothes, milk and food for young Wyatt.

In the past, the couple often went traveling on a whim. These days, each trek is preceded by tons of research and a careful eye on the weather. Still, one thing hasn’t changed — they both remain ardent climbers. “It’s a good thing my wife and I are both avid mountaineers. If only one of us wanted to go, there would always be an easy excuse to not do it,” Eduardo confides.

After two hours on the pathway, we notice the terrain change from moonscape to verdant jungle. The lay of the land, too, grows noticeably steeper as we begin the 1.5km ascent up the cone. As the pathway narrows, it becomes more scenic. Trees spread their foliage above us, offering welcome shade from the mid-day heat; below us, a gurgling stream shows the way up. By this time, little Wyatt has been alternating walking with riding on his father’s back. We stop for a breather, but not for long because the boy is raring to go — he is blissfully eating up the trail.

It is truly amusing to see Wyatt with his little feet tramping on the sand and rocks. Occasionally he stumbles, but he easily picks himself up and continues onward. For a toddler, this climb is by no means easy, yet the boy is clearly at ease in these mountainous environs. He smiles at the sight of trees and squeals with delight when stream water rushes around his feet. Occasionally, he picks up a flower and stares at it with fascination before pushing forward.

Two hours later, we arrive at the summit. Admittedly, this is twice as long as regular climbers usually take. But hey, the mere fact that this toddler made it all the way here is amazing. I watch the family take a victory selfie on their GoPro. Below us, the blue-green waters of the crater lake shimmer, ringed by craggy cliffs. We rest our tired legs and chow down on our packed lunches.

Also read: 10 things you need to bring on your next hiking trip

“You’d be surprised at the kind of messages we get on our blog,” Sharlene shares as we settle down at a vantage point overlooking the gorgeous view. “Most people are very encouraging and say Wyatt is an inspiration to other kids. But we get a few negative messages too.”

“Some people feel he is too young to be exposed to the elements, and that he’ll forget about his adventures anyway when he grows up,” Eduardo chimes in. “But all this exercise has been good for his health. He never gets sick!” In fact, when the family has stayed indoors for too long, Wyatt tends to ask to play with their camping equipment, his parents reveal. “Just like us, he gets bored at home,” Sharlene jokes. “But seriously, mountaineering helped us wean him off electronic gadgets. I’m sure all parents can appreciate that.” Another thing most parents can probably identify with is the fact that the great outdoors doesn’t magically neutralize the occasional tantrum. “Kids will be kids, and sometimes you just have no choice but to ride out their mood swings,” says Sharlene.

Back to base camp

With our batteries recharged, we decide to head back. “Here it comes — Wyatt loves the downward trek,” Sharlene says. The boy is visibly elated as he runs down the trail. His parents try to keep up with him, ready to catch their child if he loses his balance among the rocks. We bounce down the pathway, past groups of other hikers trudging up the mountain. “That’s some kid you’ve got there — he’s stronger than us!” exclaims an amused pair of winded, middle-aged hikers.

Halfway down, however, the toddler gets tired and is soon asleep in his dad’s arms. We pause for a bit to let Wyatt rest, then continue pushing onward with Eduardo carrying his 23kg son. Another hour passes before we make it back to the jeep. During the ride to base camp, the wind suddenly starts to howl and a raging storm blows in from nowhere. We are taken completely by surprise. Visibility turns to zero and we get drenched in an instant.

Our 4×4 driver tries to maintain a steady pace, navigating the vehicle over the rugged terrain as we get sprayed with sand and water. I glimpse a shivering Wyatt wrapped in his mother’s arms, looking both excited and distressed. Eduardo tries to distract the boy with a song. At this point, I begin to worry that our budding explorer is getting too much exposure to the great outdoors. Climbing a mountain is difficult enough, but to do that under sweltering heat and then face down a storm is a challenge even for adults — let alone a four-year-old.

All doubts evaporate when I turn to see the Bedurals happily soaking up the elements. Wyatt shrieks gleefully as the rain pours down on us, and his parents start giggling at the sight of their child having the time of his life. As a father myself, I know exactly how they feel. When we finally reach the base camp, Wyatt hugs his parents tightly, bliss written all over his face. He hasn’t said much all day, but now he speaks: “I love you! I’m happy!”

Trek Pinatubo
The most accessible jump-off point to Mount Pinatubo is the village of Santa Juliana in Tarlac Province, three hours north of Manila by road. Go to the visitors’ center to pay a PHP300 conservation tax. Local guide service costs PHP500 (sorry, you’re not allowed to do it on your own), while 4×4 vehicles can be rented for PHP3,000 to 4,000 per day. A more convenient option is to pre-book the trek through a local outfit like Anawangin Tours and Accommodation (+63 919 934 9474; allan.i.bognot@gmail.com), which can arrange the necessary transportation and logistics for individual or group treks to the summit.

4 farms in the Philippines that give back to the community