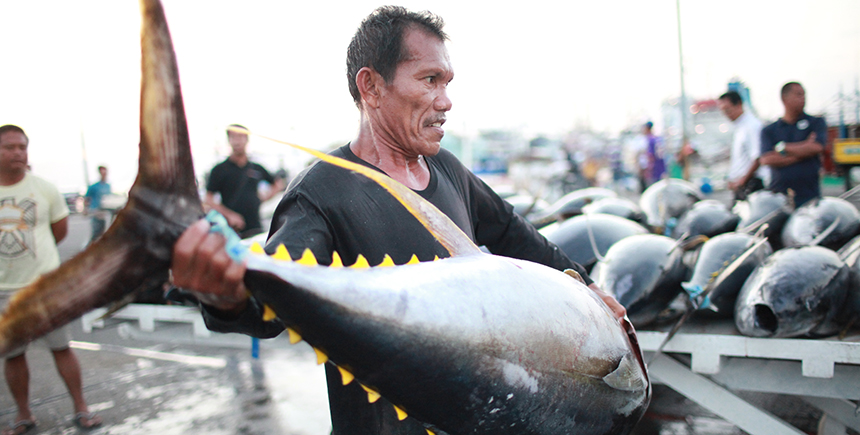 Witness the tuna trade in action, party at a fish festival and check out the natural wonders of the tuna capital of the Philippines.

General Santos — “GenSan” to nearly all Filipinos — may well be considered the modern-day Sparta of the southern Philippines, churning out world-class boxers like Manny “Pacman” Pacquiao, Rolando “The Bad Boy of Dadiangas” Navarrete and Nonito “The Filipino Flash” Donaire. All these fighters have made their mark in the international boxing scene — and they might, who knows, owe it in part to top-quality GenSan tuna.

Located in South Cotabato in Region XII, GenSan is known as the tuna capital of the country. It owes its abundant supply of the fish to its advantageous location on the “tuna highway”, which stretches from the Indian Ocean down to the center of the Pacific. Most of the Philippines’ tuna catch comes from the region, and this largely contributes to the country’s status as the second-largest manufacturer of canned and processed tuna in Asia.

It comes as no surprise that GenSan has a whole festival dedicated to tuna. Every first week of September, the city streets come alive with music and colorful parades celebrating their top fish.

GenSan is not only a place to satisfy your taste buds, it can also satisfy your wanderlust. About 63km south in the surrounding province of Sarangani is a pristine beachfront called Gumasa Beach in Glan. Known as the Small Boracay of Mindanao because of its fine white sand and turquoise waters, the beach here is quieter and less crowded than its counterpart on the more famous island. However, during the Sarangani Bay Festival in late May to early June, the beach turns into a party place. Glan comes alive with music festivals, sports tournaments and nightly parties with beach cleanups. (Parties at Glan always have environmental themes promoting sustainable tourism.)

If you’re more of a mountain person than a beach person, head for the hills at the Sarangani Highlands Garden, just 18km away from the city. The hilltop hotel, heritage park and restaurant is a favorite spot among nature-loving travelers, offering lush green gardens and a breathtaking view of Sarangani Bay and General Santos City.

Looking for something a little off-the-beaten path? Pay a visit to the Kalaja Valley, 40km from GenSan. While Kalaja Karst is a fairly popular destination, you will literally go off track, starting with an 11km car or jeepney ride, followed by a 40-minute truck ride on dirt roads, and trek through rough terrain and water crossings. Your efforts will be rewarded with caves you can explore, including the scenic Olarte Cave Pool.

By Raymond Maymay, as of January 2020. Photo by Jake Versoza.