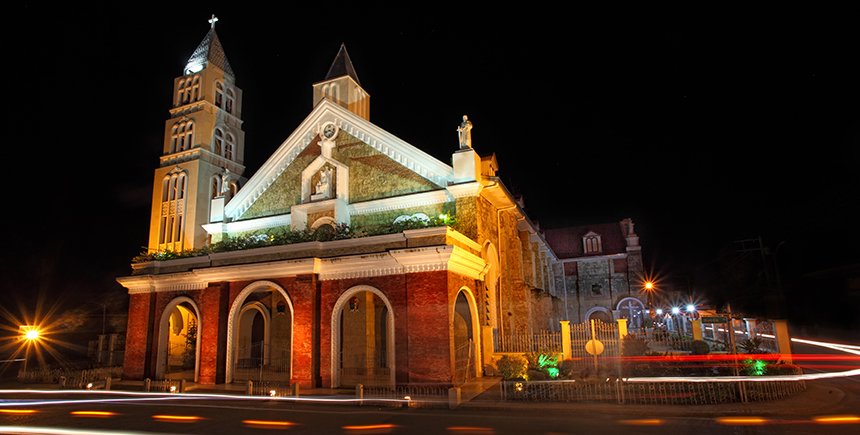 A sizable city with a small-town vibe, Calbayog offers caves and waterfalls waiting to be explored.

Scenic waterfalls, smoked fish and a dance festival in September — these are some of the highlights of a trip to Calbayog, a city in Eastern Visayas (Region VIII). Set on the western coast of Samar province, the city originated as a 17th-century riverside settlement in the charge of Jesuit missionaries. Today, it’s one of the region’s hubs for commerce, transportation and tourism, with plenty of thrills for nature-lovers and adventure-seekers alike.

In terms of land area, Calbayog is even larger than Catbalogan, the capital city of Samar, but it more closely resembles a sprawling fishing town rather than a modern metropolis. Buses, jeepneys and tricycles ply roads that are lined with mom-and-pop shops and sari-sari stores instead of sleek skyscrapers. Calbayog has got a rather sleepy, small-town vibe, but that changes in September when the annual city fiesta, called the Sarakiki-Hadang Festival, livens things up with dance competitions and street parties.

The Saints Peter and Paul Cathedral, said to be the biggest church in Samar, sits in Calbayog’s Spanish Quarter. Originally constructed in the 1800s, the cathedral has seen many renovations over the years and now features a mix of architectural styles. Join the locals milling about in the Sacred Heart Plaza across the church, which serves as the city’s main square, or stroll along the neighboring streets to see well-preserved houses dating back to the Spanish colonial era.

What travelers really come to Calbayog for, though, are the natural attractions. The gray-sand Malajog Beach, around 16km from the city center, is the most popular beach in the area. It can get pretty crowded on weekends, when locals flock there for some family fun. For a thrill, head to the Calbayog Zipline, which begins on a peak above Malajog Beach and ends on the Daraga Islet. Bring water and a towel for the steep hike to the mountaintop, but don’t worry, you’ll forget about the huffing and puffing once you’re soaring over the sea.

Guinogo-an Cave, about 16km from the city, is also a popular attraction, as is Mawacat Slide (19km from the city), a 50m-long rock cistern with a 45-degree incline. You can slide down a natural moss-covered lane into the pool below.

Calbayog is known as the City of Waterfalls, and two of its star attractions are located near each other, 42km from the city center. Bangon-Bugtong Falls (also called Bangon Falls or Bugtong Falls) features a multi-tiered, gently sloping stream; climb to the top and you’ll find a large round pond where you can go swimming and diving. From Bangon Falls, a half-hour trek will take you to the majestic Tarangban Falls, whose crystal-clear waters rush down towering rock formations.