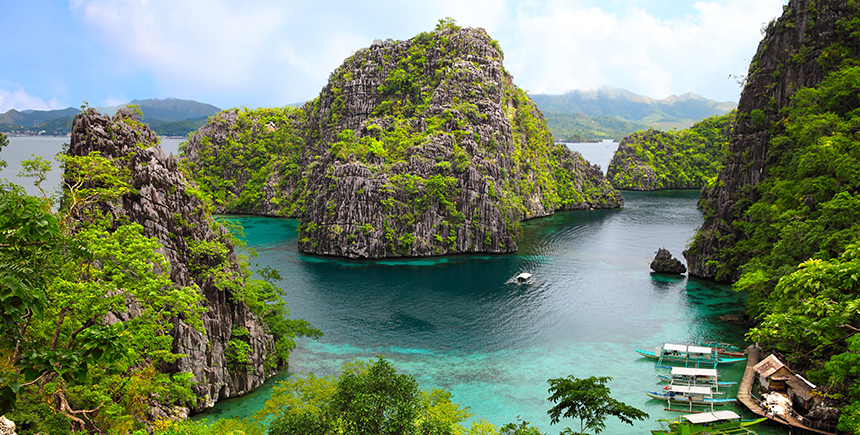 In this northern island of Palawan — known as the country’s last frontier, thanks to its ecological diversity — the only thing bluer than the sky are the waters.

Busuanga is the northernmost and the largest of the Calamianes group of islands in Palawan, which in turn is known as the country’s last frontier thanks to its ecological diversity. Busuanga is the jump-off point for the wealth of adventures that the Calamianes has to offer: diving shipwrecks and vibrant coral reefs, swimming in hidden lakes and lagoons, lounging about on pristine beaches, and exploring rainforests, karst cliffs, and mangrove-fringed islands. Exploring the waters around Busuanga is a near religious experience, as you’ll be met with a stunning seascape dominated by magnificent limestone formations jutting out of the water reaching for the sky.

Busuanga Island is divided into two municipalities: Busuanga town proper to the northwest, and Coron town in the south. There are tourist accommodations in both places, and in the surrounding islands. With Palawan making it on international lists of top island destinations year after year, Busuanga is bound to get even busier in the coming years — but for now, it’s able to retain its wild character and small-town vibe even as it welcomes crowds of tourists every year.

Getting to and Around Busuanga

You can fly direct to Francisco B Reyes Airport from Manila, Clark, Cebu and Caticlan. The best time to visit the island is during the dry season: summer, which is from March to May, is ideal but it can get pretty crowded and temperatures can soar to near nuclear levels. The weather is much cooler from December to February, but it’s still peak season so expect plenty of people during this time, too.

Though more and more hotels are opening up in Busuanga town, this side of the island is typically quieter, attracting a diving and yachting crowd. Most tourists head to Coron town, about 20km south of Francisco B Reyes Airport. Pre-arranged transfers to your hotel are your best bet but if you’re winging it, you can hop onto one of the many vans waiting outside the airport to take you into town. From there, it’s fairly easy to get to the different tourist spots that the island has to offer: You can take a tricycle or, if it’s available, your hotel’s shuttle service. If you want to venture farther out, you can rent a motorbike and explore on your own or once again make arrangements with your hotel. Island-to-island travel is done by boat and there are many packaged tours to see the main sights; all these can usually be arranged by your hotel.

A few things to remember about place names: Most travelers refer to “Coron” as shorthand for the destination, though the island is called Busuanga. What can be confusing, however, is that Coron Island is separate from Coron town — it’s a largely uninhabited island off the town, and is where many of the area’s most iconic destinations are found.

There’s no shortage of adventures to be had in Busuanga. Whether on water or on land, whether you enjoy diving or hiking, there’s always something to do. And whatever the activity, you’re guaranteed a breathtaking backdrop every time.

Coron Island, a short boat ride away from Coron town, is a dramatic limestone island that is the ancestral domain of the Tagbanwa people. As such, most of the island is uninhabited and is off-limits to visitors. The few areas that are open to tourists — including Kayangan Lake, Luluyan Lake and the Twin Lagoons — are under the administration of the Tagbanwa and are some of the most unforgettable destinations in the entire province.

Coron Bay has Southeast Asia’s best shipwreck dive spots, with the relatively well-preserved remnants of a Japanese fleet that sank in World War II. These include the wrecks of the Akitsushima, a large warship that carried seaplanes during the war; the Skeleton Wreck, located in shallow-enough waters that you can access it just by snorkeling or free diving; and the Irako Maru, which is one of the more impressive wrecks thanks to the fact that it remains largely intact and sits upright at the bottom of the ocean floor.

Still working on getting your diving certificate? You can check out several snorkeling sites and marvel at the sparkling waters and magnificent coral reefs instead. Siete Pecados is a popular snorkeling spot located off the southern tip of Coron that’s included in most island-hopping tour packages. There’s also Dimalanta Island, found east of Busuanga, which boasts waters so clear, you can practically see the reefs from the boat.

When you’re ready to give your pruney skin a break from all the water activities, take a hike up Mount Tapyas, north of Coron town proper. Standing at 210m above sea level, it’ll take over 700 steps to reach the peak, but you’ll be rewarded for your efforts with one of the best views of Coron Bay.

You can also rent a motorbike if you want to go beyond Coron and explore the municipality of Busuanga by land, making pit stops at Concepcion Falls, around 30km away in the western edge of Busuanga Island, and Ocam-Ocam Beach farther up north.

With the large influx of tourists, which is only expected to grow in the coming years, sustainable tourism has become vital in keeping the waters of Busuanga and Coron pristine and maintaining the country’s last ecological frontier clean and green. With that in mind, the Department of Tourism is currently pursuing initiatives toward ensuring the island’s marine life and natural resources are protected, by encouraging responsible tourism practices and building the necessary infrastructure.