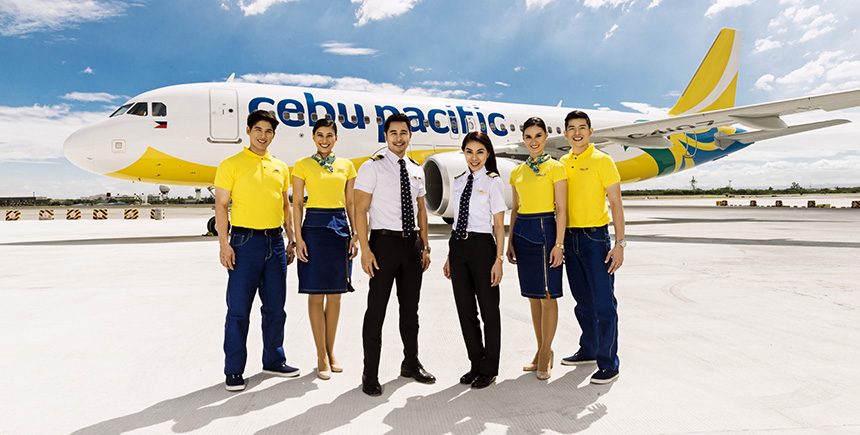 Cebu Pacific cabin crew in their new uniforms, posing in front of a Cebu Pacific airplane

The Philippines’ leading carrier, Cebu Pacific, celebrates 20 years of service today with its trademark PHP1 seat sale to 34 domestic and several international destinations. The seat sale runs from March 8 to 10, 2016 or until seats last, for travel from July 1, 2016 to March 31, 2017.

CEB launched its first daily flights to Cebu last March 8, 1996. It has since then flown over 120 million passengers on its extensive network and lowest year-round fares.

“Throughout our 20 years of operations, the Filipino people have witnessed Cebu Pacific grow from serving one route, to successfully expanding our flight network to over 90 routes on 64 destinations – spanning Asia, Australia, the Middle East, and the USA. Today, we mark this milestone by thanking everyJuan who flew, is flying, and will fly with CEB. We look forward to enabling more adventures, more reunions, and more opportunities for you,” said CEB President and CEO Lance Gokongwei.

Meanwhile, passengers can book all-inclusive fares to Guam, USA for as low as PHP1,499, and to Sydney, Australia for as low as PHP4,999. The airline is slated to launch direct flights from Manila to Guam, its first US destination, on March 15, 2016.

For bookings and inquiries, guests can visit www.cebupacificair.com or call +63 2 7020 888 or +63 3 2230 8888. The latest seat sales can be found on CEB’s official Facebook and Twitter pages. Guests may also download the Cebu Pacific official mobile app on the App Store and Google Play.