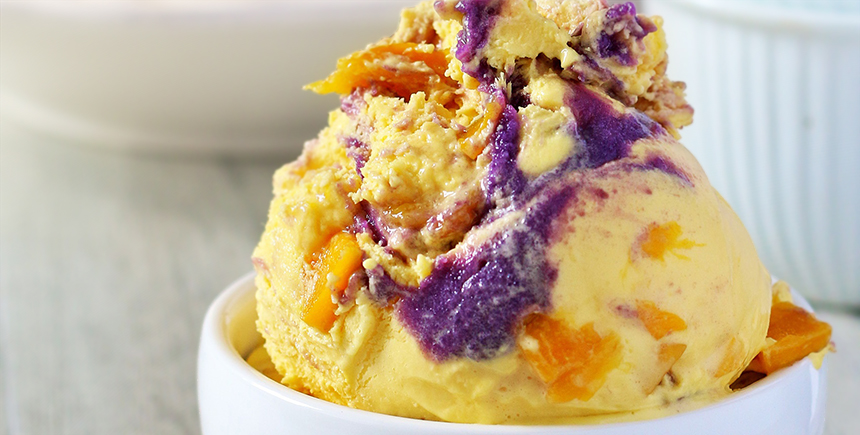 Proudly homegrown and barely three years old, Bono Artisanal Gelato represented the Philippines in the Gelato World Tour 2015, held last March in Singapore. At the close of the three-day event, its entry, Mango-Ube Symphony — mango gelato with swirls of ube halaya (sweetened purple yam) and rum-soaked strips of dried mango — won the People’s Choice Award. It joins the soy-based Taho gelato as the two Pinoy variants in the store’s summer line-up. What kind of delicious sorcery is this? Smile sits down with Bono’s R&D head and chef, Zarah Zaragoza-Manikan, and Marketing Director Treena Tecson to get the scoop on their crowd-pleasing contest submission.

How did you come up with Mango-Ube Symphony?
Z: We started by sourcing the best ingredients. The sweetest mangoes are from Guimaras but some we get from Zambales. We don’t just focus on one location; we research, as we do for the ube or yam. There are two varieties: there’s the purple one, which goes from light to deep purple, and then there’s white. The lower the land, the more purple your ube is and we wanted a bright color. Cebu is known for dried mangoes, but when we tested one, it hardened once it touched the cold. You can’t chew it. We had to soak it in rum. We can’t just rehydrate it in water because the tendency is for it to freeze. But alcohol doesn’t freeze, so once it’s absorbed by the dried mangoes, they stay soft.

What was it like at the Gelato World Tour?
Z: It was crazy fun but also hard work. We had to haul over the Philippine mangoes and the rest of the ingredients. But the equipment was provided by the organizers.
T: People had to buy a tasting card for S$8. This allowed them to sample flavors but there were 16 finalists so you really had to give it some thought. Then the votes were tallied and that’s how we got the People’s Choice for Mango-Ube. A lot of people came up to Zarah to tell her that they really liked it.
Z: Even if they were on their last one, they’d save the last scoop for the Mango-Ube. It was so touching.

What new flavors can customers look forward to?
Z: We get a lot of requests for low-sugar options so next month we’ll be coming out with a line of low-sugar flavors: Cappuccino, Double Chocolate and Blueberry.

Party idea!
Order a whole Bono Gelato cart to your event and treat everyone to a sweet fix.

This article originally appeared in the July 2015 issue of Smile magazine.