Why I always travel with my jiujitsu gi

When there’s common love for a sport, language and cultural differences cease to matter 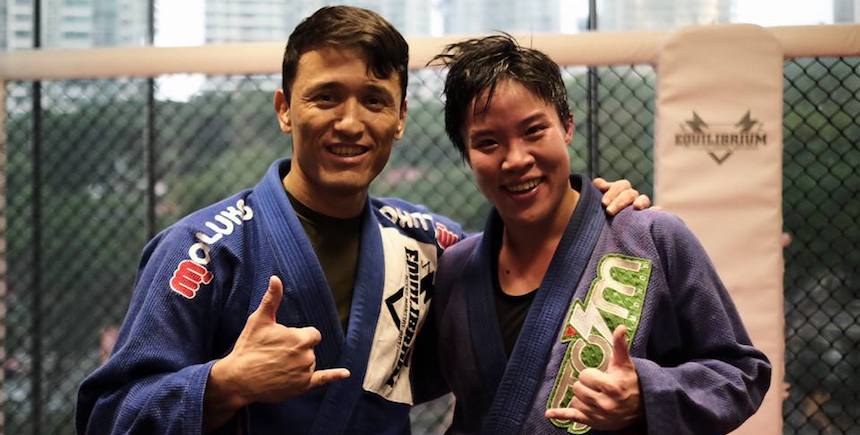 The writer with her BJJ professor Takeo Tani at Equilibrium MMA, Singapore

Since picking up muay thai on a whim eight years ago, martial arts has become an important part of my life. What started out as an attempt to overhaul my hard-partying ways in lieu of a healthier lifestyle has become a dedicated hobby that I always make time for no matter how busy I get.

Two years ago, I traded my boxing gloves for a Brazilian jiujitsu (BJJ) uniform – known as a gi – and I’ve not looked back. An ultra-technical sport that requires more brain than brawn, BJJ’s increased popularity in recent years has seen a proportional increase in its share of female exponents, for which I’m thankful. At my gym Equilibrium MMA in Singapore, I’ve formed a tight, sisterly bond with the women I train with – the kind that can only come about when we regularly try to catch each other in joint locks or chokes during training.

In many ways, jiujitsu is a great leveler. Because of it, I’ve had the chance to meet people from all walks of life – people I wouldn’t otherwise have met if I’d limited my social interactions to colleagues and friends from school. Lawyers, chefs, yoga teachers, artists, and IT professionals alike regularly take time out of their busy schedules to come in for rolls at the gym, and I’m now proud to call these people my friends.

BJJ’s tremendous growth around the Asian region and the rest of the world – thanks to the fact that mixed martial arts has now entered mainstream consciousness – has meant that almost every city I’ve had the fortune of visiting in recent years has a BJJ dojo I can train at.

I’ve visited gyms in cities as diverse as Amsterdam, Bali, and Rio de Janeiro. Each and every one of those experiences has only proven to me that, at the end of the day, people really aren’t that different from one another wherever you may be in the world. Regardless of race or creed, or the language you speak, if you have a gi and a belt with you, the chances are that you’ll be welcome with open arms at BJJ gyms across Europe, South America, or Asia. When my husband and I are in Bali, we always make time for a session or two at Bali MMA, where the classes are led by American MMA fighters, and the class is usually a diverse mix of pro fighters and casual practitioners such as ourselves, from all over the globe.

Last year, I had the chance to drop by a BJJ gym in Rio de Janeiro, Brazil when I was in the city for work. It is a well-known gym; one that has produced many champions. The professor – as black-belt BJJ coaches are called – was himself a multiple-time world champion and a household name in the BJJ community. Despite my nervousness at being one of the few beginners in a gym that had so many more experienced students – and a foreigner at that – the fear quickly went away the moment I stepped into the dojo, where I was ushered in with friendly smiles and handshakes. While the lesson was conducted mostly in Portuguese, my training partner took the time to patiently translate the techniques into English, and the more advanced students made sure to include me when the time came to spar.

In a city infamous for its crime rates, where I was warned to be careful of danger at every turn prior to my arrival, and where only about 5% of the population speaks English, I never felt more comfortable or at home.

Speak to any other jiujitsu practitioner, however, and they probably won’t be surprised at the sentiments I’ve just expressed. With discipline and mutual respect being the fundamental core values continually emphasized in the sport, the mats are an idealized microcosm of how the rest of the world should be. As politics threaten to divide humanity even further, we could all use a timely reminder of the threads that bind us together. And that’s the reason I never leave home without packing a gi into my suitcase.