The best hiking trails in the Philippines

There’s more to holidaying in the Philippines than island life and endless white-sand beaches. Explore these six trails for a taste of adventure 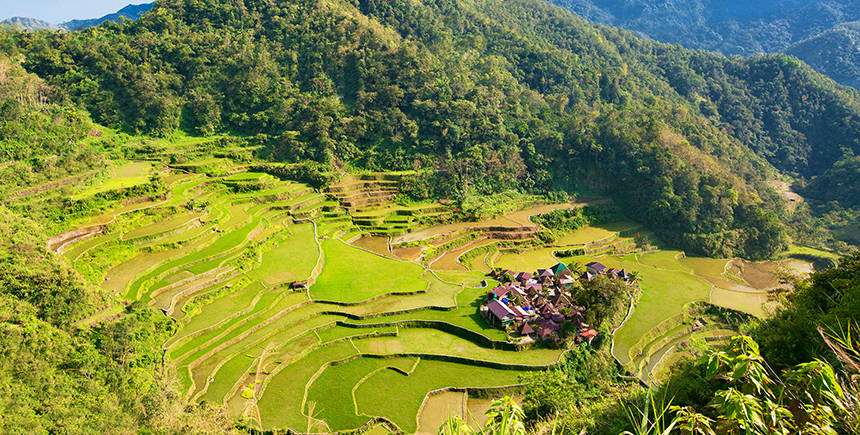 The hike: These gorgeous 2,000-year-old terraces were declared a National Cultural Treasure by the Philippine government in 1973, so you can bet that this journey will be a pretty epic one. There are several trails to choose from, but most would go for the three-day option with their tour operator of choice. Whichever trail you choose, you’ll be guaranteed gorgeous views — from lush green paddies to sparkling waterfalls.
Estimated time: Anywhere from half a day to three days
Difficulty level: 3.5/5
How to get there: Fly to Ninoy Aquino international airport and take a nine-hour bus ride from Manila to Ifugao.

Also read: How to prepare for your first hiking trip

The hike: Considered one of the most difficult trails in the Philippines, the Mt Guiting-Guiting journey is not for anyone new to the hiking scene. A well-known national park, its centerpiece is a jagged slab of rock that stands at a mighty 2,058m on Sibuyan Island in Romblon. You’ll encounter plenty of vegetation along the trail; in fact, the mountain is home to more than 120 tree species, 54 of which are endemic. Do note that guide fees will be increased with effect from January 1, 2017, but entrance fees will remain unchanged at ₱300 per person for locals and ₱500 for foreigners.
Estimated time: Three to six days, depending on the tour package you choose and your fitness level
Difficulty level: 5/5
How to get there: Fly to Ninoy Aquino International Airport and drive to Batangas City, which is 90 minutes south of Manila. Then take a ferry to Romblon, before taking another ferry to Magdiwang in Sibuyan Island.

The hike: Make your way to the highest point in Luzon on Mt Pulag and you’ll be treated to a surreal sight: a sea of clouds at sunrise. The climb up to Mt Pulag’s 2,922m-high summit is a truly scenic (and rewarding) one, but it’s not for beginners, so pre-trip training is highly recommended. There are many trails to choose from, including the relatively easy Ambangeg trail and the challenging Akiki trail.
Estimated time: Typically two days
Difficulty level: 4/5
How to get there: Fly to Ninoy Aquino international airport and make your way to Baguio (a bus ride takes about six hours). Then hop onto a jeepney from Baguio to Mt Pulang’s Ranger Station, a journey that will take another four to five hours.

The hike: For something a little more manageable, try Mt Marami in Cavite, Luzon. The trail is split into two parts — from the start of the trail to the ascent, and from the ascent to the 405m-high summit — and it can be completed in six hours, tops. Once at the peak, you can drink in views of Cavite, Batangas, Laguna de Bay and the distant Tagaytay skyline.
Estimated time: Six hours
Difficulty level: 2/5
How to get there: Fly to Ninoy Aquino international airport. Then, make your way to Baclaran (about 2km from the airport), before embarking on a three-hour bus ride to Naic. Then take a one-hour jeepney ride to Magallanes, where the trail begins.

The hike: Those looking for an easy hike with spectacular views can consider the Taal hiking trail. Elevation is just 400m, while the length of the trail measures only about 2km. With the volcano’s black, sandy paths and steam vents, you’ll almost feel like you’re exploring a whole other planet (sans the real effort, of course).
Estimated time: 45 minutes to an hour
Difficulty level: 1/5
How to get there: From Ninoy Aquino international airport, make your way to Tagaytay City. This will take anywhere between 90 minutes to three hours by car, depending on traffic. Once in Tagaytay, hop onto a jeepney or hire a tricycle to Talisay, where you’ll be able to charter a boat to get to the volcano.

The hike: The Mt Batulao trail is another one that’s perfect for those seeking a light challenge. It’s a relatively easy, undulating walk, with an almost perpetual cool breeze. The best time to conquer Batulao would be December through April, where there’s a small chance of rain.
Estimated time: Up to seven hours
Difficulty level: 2.5/5
How to get there: Fly to Ninoy Aquino international airport. Then, take a two-hour bus ride to Nasugbu in Batangas. From there, make your way to Evercrest Golf Course in Lemery, Batangas, which is Mt Batulao’s jump-off point.

Yes, You Can Now Work From One of the World’s Best Beaches