Sure, "Kikomachine" artist and author Manix Abrera wants to get you laughing but he also wants to make you think 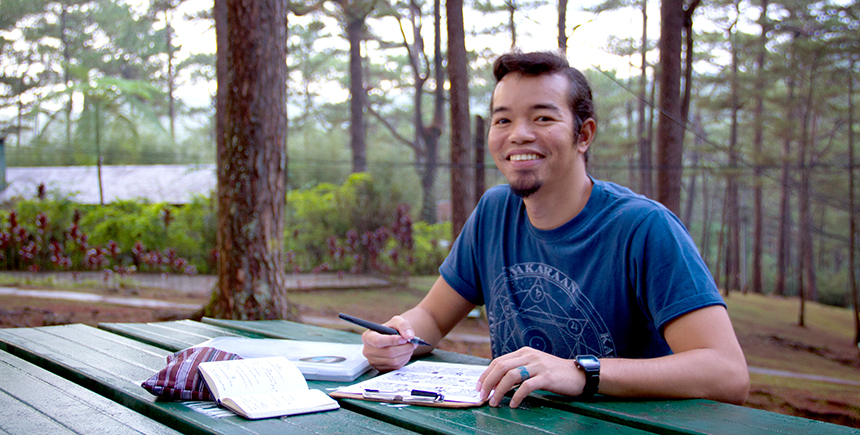 His comic strips make people laugh and think, or at the very least admit that they can relate to the situations he captures in pen and ink. And Manix Abrera is happy to hear it.

The 33-year-old musician, comic book author and artist is the man behind the popular “Kikomachine” in the Philippine Daily Inquirer, which has been compiled and turned into bestselling comic books, and “News Hardcore” on the GMA News website. Those who fly Cebu Pacific will be familiar with his strip “Travel Hardcore”, which tackles the world of travel, passenger behavior and life in the skies. It appears on the last page of every issue of Smile. Manix also released 14, a wordless graphic novel, last year and launched Kikomachine #11: Mga Kirot ng Kapalaran! two months ago.

In “Kikomachine”, Manix highlights local quirks and puts a comedic, Pinoy twist on everyday situations and conversations. In “News Hardcore”, he takes a humorous look at life as it’s experienced by media professionals — in the office and in the field.

If you think Manix is funny, earnest and truthful in his comics, you’ll be glad to know he’s the same in real life. For proof, look no further than these highlights from our recent joke- and laugh-filled interview with him.

Given that your dad is cartoonist Jess Abrera, comics and art are in your blood. Was it an easy or obvious choice for you to go into the same line of work?
I had wanted to be a cartoonist ever since I was a child because Papa was my idol (laughs). I knew I wanted to make comics like him so it was an easy choice for me. I still remember sitting beside him while he drew and copying his style. But he’d always tell me that I shouldn’t copy him; that I should create my own style.

Once you decided to pursue comics, what were the challenges you faced?
The fact that my father is Jess Abrera is challenging. When I entered the College of Fine Arts at the University of the Philippines, everyone — including my professors — knew me as “Jess’s son” so the pressure was intense. But when I joined the Philippine Collegian [the university paper], I found my voice. It was also through the paper that I was able to make comics for a large audience. Then when I started doing “Kikomachine” for the Inquirer, I had a hard time coming up with daily comic strips. I learned how to create and work regardless of whether I was in the mood or not because I had deadlines to meet.

Has your creative process changed over the years?
My creative process hasn’t changed, except that now I can make comics faster. Mas sanay na ako (I’m used to it). Before I create my strips, I go out, talk to other people, observe and listen in on strangers’ conversations (laughs). Once I get an idea, I add my own twist to it before I actually sit down and draw. I usually work outdoors. It’s more inspiring.

What else inspires you in your work?
I’m inspired by Pinoy culture and beliefs. I also love creating comics based on weird but real experiences. For example, back at UP, there was a hunyango (a shape-shifting, supernatural entity) who appears in the College of Fine Arts. One time, our professor entered the classroom and just stared at us. He didn’t say anything for hours. We learned the following day that he had actually called in sick the previous day and wasn’t at school. We then realized that it was the shapeshifter! It was super weird but it really happened and ended up in one of my strips.

That’s spooky. What kind of reactions do you get to your strips? And do these reactions match your expectations?
I get mainly positive reactions. There are those who email me to say they enjoy the strips and relate to them. But of course, there are also people who don’t get the jokes and don’t find the strips funny at all. Regardless of readers’ reactions, my intention is to just make them think.

Besides a sense of humor, what are the other essentials in your line of work? And how would you describe your brand of humor?
I don’t know how to describe my humor (laughs). Some say it’s irreverent, so maybe it’s that. Aside from the humor, another essential element of my comics is the content. It shouldn’t just be funny; it should have a message. My father would always tell me to keep form and content in mind, and that the two must be balanced.

So how do you maintain a good balance between the visuals and the content?
I still haven’t perfected it; I’m still learning. I keep in mind that form and content should complement each other. I get feedback from my siblings when I’m not sure about something. They’re very critical and honest. They’ll let me know me if my comics don’t make sense.

“News Hardcore” depicts funny, ironic but truthful interactions among media people. To what extent are these scenarios real and drawn from your own experiences?
I’ve personally experienced just a few. Most of them are the real-life experiences of journalists; I just exaggerate and add twists. But there are journalists who send me email suggesting topics or sharing their own experiences.

To what extent do you relate to your own characters?
Nice question. Of all the comics characters I’ve created, I can say that I can relate to 95% of them in some way (laughs).

You’ve become a very successful artist, with a number of bestsellers to your name. Have you given any thought to moving in a different direction with your work?
It’s just chance and luck sometimes. I’ve made graphic novels that are very different from “Kikomachine”, “News Hardcore” or “Travel Hardcore”. 12 and 14 are collections of short and weird stories in comics form but they’re “silent” — there are no words.